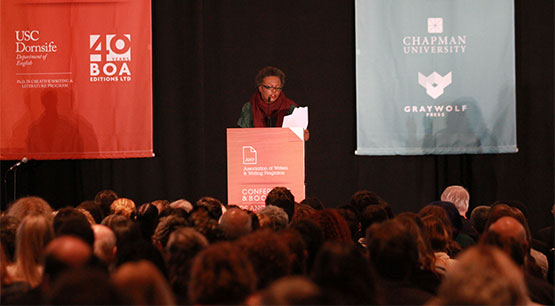 Each year, the AWP Conference & Bookfair travels to a different city in North America to celebrate the outstanding authors, teachers, writing programs, literary centers, and small press publishers of that region. Most conference events are organized by their participants and selected from among a competitive submission process by AWP's conference subcommittee. Featured events are organized and sponsored by member institutions, afiliated literary organizations, or AWP.

AWP’s first conference was held in 1973 at the Library of Congress and hosted six events and sixteen presenters. George Garrett, one of AWP’s founders, planned the first gathering with help from the National Endowment for the Arts. Presenters included Elliott Coleman, founder of the Writing Seminars at Johns Hopkins University, Paul Engle, founder of the Iowa Writers’ Workshop, poets Josephine Jacobsen and Miller Williams, and novelists Ralph Ellison and Wallace Stegner, among others. The conference grew steadily, and with the addition of the bookfair in the mid-eighties, it became the foundation for what has become the largest literary conference in North America.