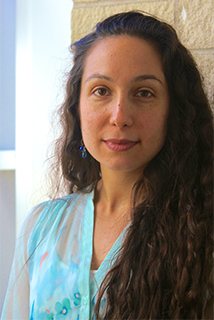 Associate Professor of Writing, Stockton University; and Facilitator/Host, World Above

About: Emari DiGiorgio’s first full-length collection, The Things a Body Might Become, is forthcoming from ELJ Editions in July 2017. She’s received residencies from the Vermont Studio Center, Sundress Academy of the Arts, and Rivendell Writers’ Colony, and a poetry fellowship from the New Jersey State Council on the Arts. She teaches at Stockton University, is a Geraldine R. Dodge Foundation Poet, and is an active member of the South Jersey Poets Collective, where she hosts World Above, a monthly reading series in Atlantic City, NJ; A Tour of Poetry, a monthly poetry workshop for older adults in Northfield, NJ; and a series of community writing workshops for underserved populations in the South Jersey area.

Find Emari in the Directory of Members

How do your programs work on behalf of their members, constituents, or clients?
I provide three different types of community writing programs: World Above Free Poetry Nights, a monthly open mic and featured reading series at Stockton University's Dante Hall in Atlantic City, NJ; A Tour of Poetry for Seniors, a monthly workshop sponsored by Stockton’s Center on Successful Aging held at the Otto Bruyns Public Library of Northfield; and six-week poetry workshops, facilitated by undergraduates enrolled in my general studies course GIS 3307 Why Poetry Matters, at various community organizations in Atlantic County, including after-school programs, homeless shelters, juvenile detention centers, and other social centers.

These programs have brought poetry to young people and older adults who may not have an opportunity to express themselves or to share their stories. Many participants have found therapeutic value in the programs, expanded their social circles, and felt inspired to pursue and share their creative interests.

What programs would you like to develop and create?
I would love to unify all three of these programs under one roof and establish South Jersey's own Writers/Poets House. Ideally, I'd want to continue the reading series and undergraduate-taught workshop series and expand the guest writer workshop series. I'd also love to start a teen writing group and offer literacy classes. These are big dreams, but I'm rooted here and ready to work toward them.

Since its inception, what are some of the proudest accomplishments of your organization?
For me, it's so rewarding to see a steady increase in attendance at the monthly readings and workshops and to see the diversity of the audience increase as more diverse poets have been featured. It's important for me to help build a reading and workshop series that reflects the community of writers here.

In addition, World Above featured youth poets who have been participating in one of my undergraduate-run poetry workshops at Covenant House, Atlantic City's youth homeless shelter. In May 2016, we hosted The Outlast Project, a poetry event & interactive healing art project designed to empower survivors of sexual assault.

Describe the region where your programs are housed. What is the literary community like?
Atlantic County, New Jersey is home to farms, suburban developments and sprawl, Casino and tourist districts, and acute urban poverty. Along Absecon Island alone, the four-mile barrier island running from Atlantic City to Longport, you will find the state's most diverse Census tract (in AC's Chelsea section), and one of the state's least racially and ethically diverse communities (Margate, where the median income is more than double that of Atlantic City's).

Fortunately, the literary community has been able to unite these disparate populations, but it has been essential to select venues that are closer to or within the communities of those who are underserved. Reading and workshop attendees reflect the varying racial, ethnic, and socioeconomic groups, and at World Above, it's not unlikely to have a nine-year-old and an eighty-year-old sharing their original work.

These programs have helped the literary community grow, and attendees from each group have started to attend the other's events.

Who encouraged you to be a writer?
I think my most important mentor when I was a student may not even know how important she was. At NYU, I was in Marie Howe's workshop section, and during office hours one day, she asked me, "Where is the woman in these poems?" She intuited a type of holding back. I didn't know that I was censoring myself, but as soon as she asked this question I was freed to write the poems I needed and wanted to write.

The book you could read again and again? Why?
Ross Gay's Catalog of Unabashed Gratitude. The poems are so lush, so full of teeming abundance, in spite of the immense loss and grief they mourn. They are poems that celebrate being alive and in love with friends and family. I also love what the book is doing formally, how the syntax bends and slips, and in "Spoon," a poem that leaves me in tears every time I read it, the first sentence spans eight pages.

Describe your writing process. Do you write every day?
One the best ways for me to generate material is to record an audio draft where I talk through my ideas. I can do this in the car or when I'm walking somewhere. I transcribe the material myself, rather than using an app, because it puts me in closer contact with the text and I can pause the play-back to write/riff on whatever has come up. I'll find the most interesting language and images in this mass of text and see where that wants to go. While I'm teaching, it's not possible for me to write every day. My students and their writing get the early morning and late night hours I would typically reserve for my own writing; however, I am sure to draft one new thing a week. I send weekly drafts to my friends, who do the same. It reminds us that we're writers, despite the other forces in our lives that demand attention.

Do you feel influenced by your peers to produce a certain type of work?
In the months before my daughter was born in March 2013, I experienced a huge shift in perspective regarding my creative work. I think I had been afraid of claiming or committing to a poetics of social justice. Poems that bear witness and ask readers (and the writer/speaker) how they are complicit are hard to write well. I realized those were the poems I needed to write; my conscience demanded it of me. At the same time, I love what Denise Levertov says about writing, "I'm not very good at praying, but what I experience when I'm writing a poem is close to prayer." Writing poems yokes me to the present and to the divine, which are of the same cloth.

Can creative writing be taught?
Writing can be learned, in the academy or through individual study. I love what Neruda writes: "And it was at that age...Poetry arrived/in search of me. I don’t know, I don’t know where/it came from.../there I was without a face/and it touched me." Once a person connects with language in that way, there's an urge to replicate it, and people do, but in private. The act of sharing that work requires great bravery. The safest and most nurturing teaching environments can help a new writer discover what their favorite poems/poets are doing and help them find and meld their own voice to the lineage of writers that speaks to their experience and existence.

What is your favorite AWP Conference memory?
In 2006, at the end of the Austin conference, which was at the same time as South by Southwest, I was walking through Austin-Bergstrom International and all of these famous poets were seated everywhere. I saw Mark Doty drinking a coffee and Sharon Olds reading beneath a ridiculous hat. While other people were excited to see musicians roaming the terminals, I felt like I was part of this other amazing underground scene: poetry.