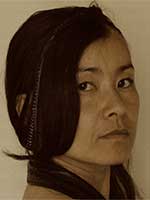 Zora Mai Quỳnh is a genderqueer Vietnamese writer whose short stories and essays can be found in The SEA is Ours, Genius Loci: The Spirit of Place, and POC Destroy Science Fiction, Luminescent Threads: Connections to Octavia Butler.  Her poems and short stories can be found on Strange Horizons and Kweli Journal. Her short story, “The Seashell,” published at Masque & Spectacle, was nominated in 2015 for a Sundress Best of the Net Award for fiction, given honorary mention by the literary magazine, Glimmer Train, and was featured in APAture 2016. Visit her at: zmquynh.com.