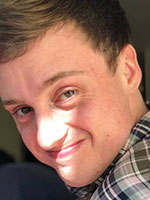 William Ward Butler is a writer and educator from northern California. He studied literature, creative writing, and education at UC Santa Cruz, where he was a senior editor of Chinquapin Literary Magazine and co-editor-in-chief of Fish Rap Live, a satirical newspaper. He has read his poems at the Kennedy Center in Washington D.C. and the Nourse Theater in San Francisco, and has been published in Assaracus, Bodega Magazine, Hobart, and other journals. He works for the Young Writers Program in Santa Cruz and leads Word Lab, a free after-school creative writing program for middle school and high school students.