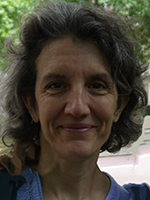 Shelley Evans lives, writes, and teaches writing in Cambridge, Massachusetts. She has written teleplays for ABC, CBS, Showtime, USA Network, and Lifetime Television. Her produced scripts have starred, among others, Anne Heche, Sam Shepard, Josh Brolin, James Caan, Jacqueline Bisset, Candice Bergen, and Mercedes Ruehl. She received an MFA in Dramatic Writing from New York University. That was a long time ago. Having recently completed her first novel, she is grateful for the opportunity this program offers to begin again.