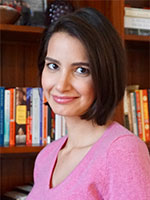 Olivia Katrandjian is an Armenian American writer and journalist with a background in print reporting and documentary filmmaking. She has worked in Thailand, Armenia, and New York, and her reporting has appeared in numerous outlets, including the New York Times, the Los Angeles Times, the BBC, ABC News, and Quartz. In 2016, she moved to Luxembourg to write a historical novel based on the Ghost Army, a top-secret group of artists who used inflatable tanks, sound effects, and fake radio transmissions to deceive the Germans in the Second World War.