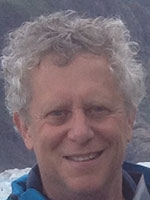 Ken Post, originally from the suburbs of New Jersey, recently retired from the Forest Service after working in Alaska for 40 years studying grizzly bears, building trail, as well as managing a large mine and several wilderness areas. He previously published nonfiction in Forest World and has moved on to fiction, often drawing on his experience in the woods. During the long, dark winters, he writes short stories. He currently resides in Juneau, Alaska in a remodeled beach home on Lena Cove that looks across a glacial fiord—a constant inspiration for his writing.