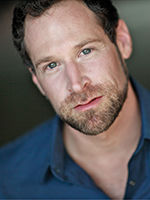 Jon Levenson spent most of his career as an actor in New York, Chicago, Los Angeles, and beyond. Levenson was part of the Broadway cast of Larry Kramer’s The Normal Heart in 2011. But, after almost two decades of gypsy life, he returned home to grow roots in California and do some serious uncle-ing for his twin nephews. It was during this time he fell in love with writing. Levenson has been pursuing his new passion hardcore at University of California Riverside's Low Residency MFA and will graduate in December, 2016.