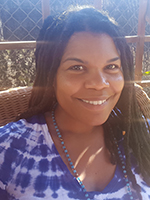 Benin Lemus is an essayist, poet, filmmaker, and educator. A longtime resident of South Los Angeles, she earned a BA in English from Bennett College and an MFA in Cinema-Television from USC. Benin has had fellowships with the National Endowment for the Humanities and the Hurston-Wright Foundation. She has performed at the Kirk Douglas Theater through her work with the Center Theater Group’s Community as Partners Program. After more than 15 years mentoring public school students as an English teacher, Benin is thrilled to at last work with a mentor of her own.