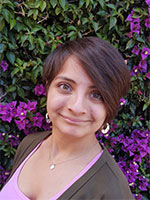 Angela M. Sanchez is a Los Angeles native and 2018 PEN America Emerging Voices Fellow. Working at the nexus of higher education, policy, and the nonprofit sector, Angela focuses on narratives that have been typically underrepresented in children's literature. She has written and self-published a children’s book, Scruffy and the Egg, about single-parenthood and homelessness. Her first novel, a YA urban fantasy, received SCBWI's 2017 Work in Progress Award. Angela was a 2018 finalist for the Speculative Literature Foundation’s Diverse Writers/Worlds Grant. Her writing has appeared in the Los Angeles Review of Books, Exponent Philanthropy, and Emerging Practitioners in Philanthropy.