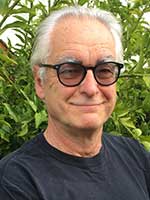 Andrew Miller, his wife, and cat live in Maine during the summer and in northern Florida during the winter. He became interested in creative writing in high school, then switched his major to biology in college. During his career in government research and teaching, he published technical articles on environmental issues and endangered species. Now in semi-retirement, he has time to learn the craft of creative writing. He writes both nonfiction and fiction and has published in Literally Stories, Foliate Oak Literary Magazine, Temptation Magazine, The Fair Observer, and Fiction on the Web.