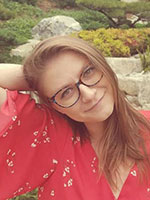 Amy Victoria Blakemore is an emerging writer based in Hartford, Connecticut. Originally a student of poetry, Amy began translating her failed drafts into short fiction in 2013, after which she went on to win the 2014 Kenyon Review Short Fiction Prize and the 2017 WritingxWriters Short, Short Fiction Prize. Her short fiction has appeared in the Kenyon Review, [PANK], wigleaf, and Paper Darts, and her nonfiction has appeared in the Indiana Review and Redivider. She is currently at work on her first collection of essays, a meditation on anorexia, bisexuality, and bad dreams.