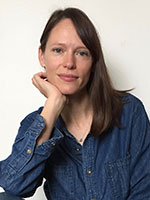 Ainsley McWha, originally from Nepean, Ontario, Canada, now lives and writes in a hundred-year-old house in southeast Idaho—a state she had never visited before moving there in April 2014 from New York City. Her work has appeared in Salon, the Washington Post, the Huffington Post, and xoJane, and is forthcoming in the Tahoma Literary Review. In Idaho, Ainsley and her husband look after thirteen animals: two dogs, six cats, two bunnies, and three chickens. She holds an MFA in creative nonfiction from The New School and currently teaches writing through the College of Eastern Idaho Outreach program.