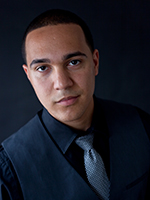 Aaron Samuels, raised in Providence, Rhode Island, by a Jewish mother and a Black father, is a Cave Canem Fellow and a nationally acclaimed performer. His work has been nominated for a Pushcart Prize, has been featured on TV One’s Verses & Flow, and has appeared in many journals including Tidal Basin Review and Muzzle Magazine. His debut collection of poetry, Yarmulkes & Fitted Caps, was released from Write Bloody Publishing in the fall of 2013.