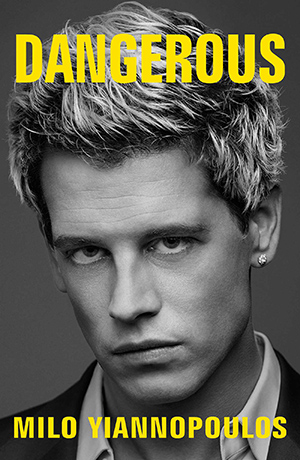 Simon & Schuster’s announcement of its $250,000 book deal with British journalist Milo Yiannopoulos—an editor at the conservative news site Breitbart News as well as a self-proclaimed “alt-right” spokesperson—has shocked and angered many within the publishing industry.

Yiannopoulos, whose book Dangerous has already ranked as the No. 1 bestseller in Amazon’s “Censorship & Politics” section due to pre-orders, expressed surprise at the news himself. “I met with top execs at Simon & Schuster earlier in the year and spent a half an hour trying to shock them with lewd jokes and outrageous opinions,” Yiannopoulos told the Hollywood Reporter. “I thought they were going to have me escorted from the building—but instead they offered me a wheelbarrow full of money.”

The editor got his claim to fame when he was permanently banned from Twitter for “violating the terms of his agreement”—but more specifically, for trolling Leslie Jones, Saturday Night Live and Ghostbusters actress, with racist and sexist comments, the New York Times reports.

“They said banning me from Twitter would finish me off. Just as I predicted, the opposite has happened,” Yiannopoulus told the Hollywood Reporter.

But the book deal doesn’t surprise everyone. Dennis Johnson, the cofounder and copublisher of Melville House, writes that “this is where American publishing is now—or at least, the fifty percent of it dominated by the so-called Big Five”—and it’s been there for a long time.”

Still, some are calling for a boycott of Simon & Schuster’s books, Johnson included, and Adam Morgan, editor of the Chicago Review of Books, explained in the Guardian why his publication plans to boycott all 2017 titles from Simon & Schuster. However, Alexandra Schwartz argues in the New Yorker that a blanket boycott would be less effective than more candid forms of protest such as “e-mails, letters, tweets, and phone calls—you name it.”

Simon & Schuster released a statement in response to the outcry, which reads, “We do not and never have condoned discrimination or hate speech in any form.... While we are cognizant that many may disagree vehemently with the books we publish we note that the opinions expressed therein belong to our authors and do not reflect either a corporate viewpoint or the views of our employees.”