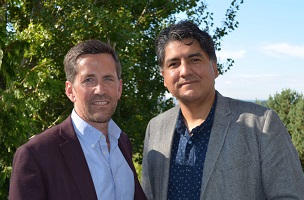 According to the Los Angeles Times, Alexie and Walter speak by phone in Washington State, close to where both men grew up; Alexie on the Spokane Indian Reservation, and Walter “close by.” The focus of the show, according to Alexie, is, in addition to discussing literature, “to talk about everything” on the podcast, including basketball, other sports, and people whose lives aren’t connected to books.

Writer Carolyn Kellogg says in the article that “What makes “A Tiny Sense of Accomplishment” unique is that Walter and Alexie, two very accomplished writers, will be reading their works-in-progress,” adding that Walter finds sharing works-in-progress “more vital” than sharing finished works, and may reveal insights into that process of revision that is “mysterious to all of us.”

“A Tiny Sense of Accomplishment” will post new episodes every Wednesday in iTunes.