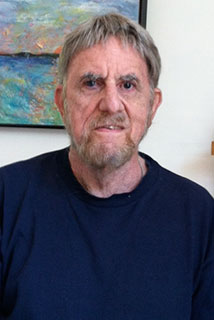 About: Michael Steinberg has written and co-authored five books, including Still Pitching, which won the 2003 ForeWord Memoir of the Year award, and The Fourth Genre, an anthology with Robert Root, now in its 6th edition. He is the founding editor of the literary journal Fourth Genre and a writer-in-residence in the Solstice MFA Program at Pine Manor College.

Find Michael in the Directory of Members

What is the best writing advice that you dispense to your students?
Revision/re-seeing is the key to all good writing. At the start, give yourself permission to write badly. Write everything that comes to mind. Reread the (messy) draft, looking for patterns and repetitions. And wherever you find them, cut everything else away and start there.

Even when you think a piece is finished, put it away for a few weeks—months, even—and then read it again. If you still think it’s done, send it out.

Robert Frost said, “No surprises for the writer, no surprises for the reader.” Each time you write, you hope to surprise yourself. When something unexpected, something unbidden, doesn’t show up on the page, it’s a bad writing day. You can find more extensive thoughts and opinions on/about writing and teaching on my monthly blog, http://mjsteinberg.net/blog.htm

What is the best career advice that you dispense to your students?
When I was a younger writer, I complained a lot to Donald Murray, my mentor, about all the rejection slips I was getting. To which he said: “The acceptances are just as irrational as the rejections.” Murray was right. But I didn’t fully understand what he was getting at until I became an editor of a literary journal.

Can writing be taught? Why does creative writing belong in the academy?
Yes, writing can be taught. And yes, it belongs in the academy. But mainly if it’s taught by practicing writers. And only if aspiring writers are voracious readers as well. In addition, as teachers and writers, we all know that talent, a predisposition for writing, is important. But we also know that when it comes to our students, we can’t measure or predict the intangibles—things like desire, yearning, passion, curiosity, tenacity, persistence, sheer determination, and hard work. Possessing those qualities—with or without raw talent—is a big piece of what it takes to succeed at writing, or at anything else for that matter.

Do you feel influenced by your peers to produce a certain type of creative work, or do you feel free to follow your own interests and passions?
Both. We’ve all experienced the feeling of believing that we’re neither good nor imaginative enough to become the writer we want to be. Competing and/or comparing ourselves to other writers—peers or the great writers we’ve read—that’s our internal censor talking. A colleague once gave me some advice that I’d like to pass on: “Stop comparing yourself to others,” she tells her students. “You’re the only one who can write this piece.”

What is your favorite thing to do when you should be writing, but just can’t find the motivation?
Whenever I feel uninspired or unmotivated, I compose notes or letters about writing (especially about matters of craft) and send them to like-minded colleagues and/or former students. I also keep reminding myself that the track record says that I’ve done this before and can do it again.

What is the greatest compliment that you could ever receive about your writing?
When someone who’s read my work or heard me read tells me, “Yeah, I’ve felt exactly like that before. Until I read (or heard) your work, I thought I was the only one who felt that way.”

Why did you decide to join AWP?
After thirty-something years in academia, a place where I often felt like an outsider, it only took a few AWP conventions before I understood that the teachers and writers in attendance were far less petty and competitive; much more open and curious about teaching, writing, and literature; less standoffish and pretentious; and more respectful and supportive of one another’s work than most of my colleagues in academia were. AWP, it seems, fosters a sense of camaraderie and creates an atmosphere where serious teacher-writer-readers like myself feel as if we belong; a sense, in other words, of community—a spirit of inclusiveness that has carried forward into all of the low-residency MFA programs and several of the undergraduate and graduate creative writing programs I’ve been a part of.

How has AWP helped you in your career and/or creative endeavors?
For me, AWP continues to offer worlds of possibilities. For many of the reasons I mentioned above, my affiliation with AWP has led me—directly and indirectly—to teaching and publishing opportunities as well as to personal and professional relationships that I never could have dreamed about earlier in my writing/teaching career.