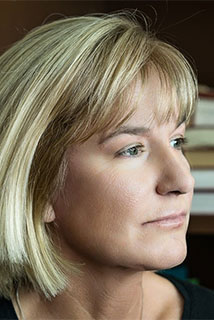 About: M.B. McLatchey is a recipient of the 2011 American Poet Prize from the American Poetry Journal, and the author of two award-winning collections of poems, most recently The Lame God (Utah State University Press), which was awarded the 2013 May Swenson Prize. Currently a professor of Classics at Embry-Riddle Aeronautical University, M.B. is also Florida state's Poet Laureate for Volusia County, serving as a mentor to young poets and co-facilitating and participating in panels that address the link between citizenry and artistry. She has received numerous academic awards, including the Harvard University Danforth Prize, the Radcliffe Prize for Literary Scholarship, and the Brown University Elmer Smith Award.

Find M.B. in the Directory of Members

Who encouraged you to be a writer?
My Portuguese mother encouraged my writing life—although she never bought me books or showed any overt encouragement. She loved to tell stories, often changing whole scenes depending upon the listeners. I learned from her the value of connecting with people through stories. She barely graduated from high school, but she brought me hot tea and sweet bread when my light was still on after midnight, and I was (in those days) tapping away on my Olympia typewriter.

What are you reading right now?
This month, I am reading (for the first time) Beth Anne Fennelly’s Unmentionables and re-reading Merwin’s The Lice. I am reading like a student, of course—with a special interest in social taboos in literature (Fennelly) and in the use of form in “political” poetry (Merwin).

Merwin confessed in an interview recently that he has come to the recognition in his later years as a poet that experimenting in form can be very freeing for the writer. To paraphrase, he also realized that the most-deeply felt convictions were best rendered in poetry with metaphor, rather than with a megaphone.In The Lice, this means allowing the unconscious to direct his verse lines, aiming for new forms in his poems that invite transparency and honesty.

What do your books look like once you’ve finished reading them? Do they have broken spines and dog-eared pages? Notes in the margins? Or do they still look brand new?
I have never been simply a reader; I have always loved to watch the performance as well as listen to the ideas when I read. For this reason, there are lots of notes (in pencil) in the margins of my books attending to the performance.

When do you find time to write?
Whenever I make the time—daily. I should be grading student essays right now. In my life, writing poems has always been somewhat akin to having an affair—I am always cheating on someone or on some other “adult” obligation when I go into my well to write poems. Particularly as a professor at an engineering university, how does one defend these sessions of playing with form and searching for an authentic voice in my poems—what Milosz once called “fettering the form, so that the unconscious may be unfettered”? This looks like voodoo to an engineer.

What is the greatest compliment you could ever receive about your writing?
I think that being a writer means having the courage to say “yes” when our topics choose us. The greatest compliment I think I ever received came after a recent reading in Utah from my book The Lame God. A young woman, who was a student at Utah State University shared with me that hearing my poems had given her the “courage to write” about a topic that she worried would invite judgement from her peers and community.

What is the best lesson you have learned from a book?
Best lesson learned: that writing is possible, and that it need not subscribe to any one form or set of rules. I remember feeling something almost physical happening to me when I first engaged with the poetry of Yevtushenko—later the poems of Charles Simic, Seamus Heaney, Marilyn Hacker, and Audre Lorde. As different as these poets are, they all taught me the same lesson—a lesson that Yevtushenko once mentioned in a speech he delivered to some American college students—namely, that as poets and artists, we are only distantly protected by a First Amendment. As writers, we are guided and protected by a Constitution, but first and foremost by our own consciences.

What is your favorite thing to do when you should be writing, but just can’t find the motivation?
I clean things… as if I am clearing away dust from my consciousness… burrowing down into my consciousness. I once met a maid in a hotel that prayed aloud while cleaning; this is close to what I am doing.

Would you like to share a project you are currently working on?
I am near completion of a collection of poems, tentatively titled TABOO, which examines the collision between our natural lives and a society’s taboos. The poems play within the context of an unregulated world and an unregulated female body; on the level of craft, they play within the context of inherited forms and they explore the difficulty with which even the unharnessed body sounds out musical counterpoint.

Who/what do you follow online?
I read interviews and blogs of other writers. It’s an eclectic list—from new formalists like Annie Finch to improvisational artists that examine our American identity, like Gregory Pardlo or Sonia Sanchez.

I really believe in the notion that we should “bloom where we are planted.” For this reason, I pay great attention to opportunities to read with other writers in Miami and in Central Florida, as well as in local venues. I read the work of these writers and write reviews of their work for regional presses. I also stay on top of international writers, and I attend national and international conferences. This summer, as a recipient of the DISQUIET scholarship, I will participate for a second time in the DISQUIET Conference in Lisbon, Portugal. There, I will be working on a Portuguese-English translation project I have begun with some of the most distinguished Portuguese contemporary authors.

What is your favorite line from a book?
The opening line in Dylan Thomas’s A Child’s Christmas in Wales:

“One Christmas was so much like another, in those years around the sea-town corner now and out of all sound except the distant speaking of the voices I sometimes hear a moment before sleep, that I can never remember whether it snowed for six days and six nights when I was twelve or whether it snowed for twelve days and twelve nights when I was six.”

I was in a seventh grade Study Hall in Bicknell Jr. High School when I read that line. It made me extremely happy to hear this talk of “trying to remember things accurately” in writing, and I remember thinking how very accurate that sentence was.

How has AWP helped you in your career and/or creative endeavors?
Each AWP conference is a retreat from which I return to my home base recharged and affirmed as an artist. I am humbled by the shockingly good talent in the world that so many of us miss most of the time. AWP has been the surrogate home-base that I rely upon throughout most of the year—through its publications and through its facilitating of relationships with other writers that I have developed in conferences and other events.

What would be your advice to new AWP members, on how to make the most of their membership?

What is the best writing advice that you dispense to your students?
Outside of making writing a habit (rather than an assignment), I advise my students to read other writers. Recent data from some of the finest MFA’s shows us that the majority of writers are not great readers. Reading is the only way that I can imagine expanding-the-university-that-is-our-own-selves so that we can become better writers; so we can discover our own voices; and so we can make our worlds larger. To my students that are also athletes, I tell them that writing is like “working out;” it takes lots of visits to the gymnasium before we begin to see results.

What is the best career advice that you dispense to your students (information about the query process, publishing, finding an agent, etc.)?
Practically speaking, I advise my students to send their work to journals and publishing houses judiciously—that is, with an eye on whether they are a “good fit.” This requires their familiarity with what these presses publish—so again, research and reading on their part. I also frequently remind them that editors and agents actually do read their queries (many with great care), hence, the importance of concisely helping editors to understand why they should publish our work. Lastly, I remind them that the flourishing of independent presses has spawned a kind of Golden Age for democratic representation in the literary world—and that the so-called big presses are not necessarily the best homes for their work.

Philosophically speaking, I advise my students to be writers first, authors second. This goes to the idea of answering to one god at a time—first, the god of your own conscience and culture; secondly, the god of the publishing and marketing world.

Can writing be taught?
I have no doubt that writing can be taught—but here the burden of responsibility falls mostly on the teacher, not the writer. By this I mean that writing must be taught in a way that emphasizes discovery and growth of the student-writer’s voice, rather than emphasizing adaptation of a writer’s voice to a history of literature or to current trends in literature. I believe that this is the best way to foster originality and freshness in young and so-called “emerging writers.”

Why does creative writing belong in the academy?
Creative writing—and the arts, in general—belong in the academy to remind scholars of the importance of joining imagination with research. Certainly creative works blend these two pieces, and our best intellectual discoveries always have, as well. As a professor at an engineering university, where learning and investigation into the human condition is so often attached to rubrics and measurable assessments, I have been recognized for my own STEM-to-STEAM engagements, so that we are not simply teaching skills, but instead we are focused on teaching the whole person in the academy. A favorite play of mine is The Clouds by the ancient Greek playwright, Aristophanes; here, students attend an academy called “The Thinkery” (very Orwellian!) from which students graduate with great rhetorical skills, but they have no core values: great talkers, terrible human beings. We need the creative arts in the academy to make us better human beings.