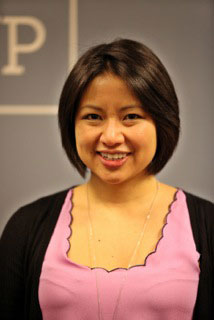 About: Kirstin Chen's debut novel, Soy Sauce for Beginners, is forthcoming in the fall of 2013. A 2011-12 Steinbeck Fellow in Creative Writing, her fiction has won awards from the Sewanee and Napa Valley writers' conferences. Her stories have appeared in Hobart, Pank, The Good Men Project, and others, and have been nominated for the Pushcart Prize and the Best New American Voices anthology. She holds a BA from Stanford University and an MFA from Emerson College.

If you could be any literary character, who would you be?
Brett from The Sun Also Rises, but really I’d take any of Hemingway’s anti-heroines.

What book could you read again and again?
Lolita. Also, The Great Gatsby.

And what is your guilty pleasure book?
I recently read Charlotte Au Chocolat. I didn’t feel the least bit guilty about reading it, but it does strike me as the kind of frothy, utterly charming book that could be described as “guilty-pleasure reading.”

What are you reading right now?
Wild, by Chery Strayed, and The Newlyweds, by Nell Freudenberger.

Your favorite literary line?
Coetzee’s Disgrace has a perfect opening line: “For a man of his age, fifty-two, divorced, he has, to his mind, solved the problem of sex rather well.”

What book made you want to be a writer?
Bad Behavior, by Mary Gaitskill. It also made me attempt to write dark, edgy stories about people who practiced lots of deviant sex, which, in retrospect, was a huge mistake.

When and where do you do your best work?
At home, in my study. I need silence—no music, no background noise. Sometimes I even wear earplugs in the silence.

Describe your process.
I write Monday through Friday for a set number of hours, always in the same place, at the same time, with my computer as well as the aid of that program, Freedom, to prevent me from incessantly checking my email. I am a true creature of routine. On the plus side, I know what works for me. On the negative side, I have a tough time getting anything done when I’m away from home.

What is your favorite thing to do when you should be writing but just can’t find the motivation?
This is going to sound hokey, but I meditate for twenty minutes—just a few simple breath-retention exercises. I’ve been a pretty serious ashtanga yoga practitioner for the last six years, and I was introduced to meditation through yoga.

What are you working on now?
A novel set in 1958 on a tiny island off the coast of Xiamen in Southern China. The family living on the island is forced to flee to Hong Kong when the son reports his grandmother to the communist government. In their attempt to procure visas on such short notice, the family is forced to leave behind the youngest daughter as proof of their plan to return.

What lessons have you learned from literature?
I recently learned a useful one from Cheryl Strayed’s Wild: just because you can walk doesn’t mean you can hike.

And what’s the best writing advice you’ve received?
“You absolutely can torture a piece of writing into publication,” courtesy of my former professor and thesis advisor, Pamela Painter.