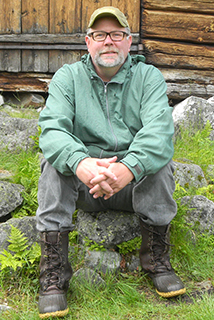 About: Allen Braden is the author of A Wreath of Down and Drops of Blood (University of Georgia) and Elegy in the Passive Voice (University of Alaska/Fairbanks). His poems have been anthologized in The Bedford Introduction to Literature, Poetry: An Introduction, Best New Poets, and Spreading the Word: Editors on Poetry. Assistant poetry editor of Terrain.org: A Journal of the Built + Natural Environments, he has received fellowships from the NEA and Artist Trust.

Find Allen in the Directory of Members

What is the best writing advice that you dispense to your students?
1. Read (the classics and the contemporary) more than you write. The arbitrary formula I give my students is to read one volume of verse for every poem they write. My colleagues and I are amazed and horrified by the argument that comes up in every creative writing class: “We’re writers. We don’t have to read anything.” or “We don’t want to be influenced by what we read when we write.” Hogwash! My response to these protests is this: Why did Picasso imitate the Old Masters before doing his groundbreaking work? Why did Ronnie James Dio study opera before recording his heavy metal rock music? They both realized the value of internalizing the tradition from which they came and against which they would rebel. If you don’t know the classics, you risk being cliché without knowing it; if you don’t know the current state of poetry, you may never find a place within your own artistic generation.

2. Value image over insight. A good idea can kill a poem before it’s even born. Ideas are for inventors, not musicians or artists. The insights arising from the imagery and metaphor in poetry should have been epiphanies for the poet as much as they will be later for the reader. Robert Frost said, “I write to find out what I am thinking.” Thus the creative process is, in many ways, one of discovery. This means you must respect your subconscious and respect your reader. Forcing your thoughts upon the audience risks being didactic and power-trippy. Trust the poem’s situation, its music, its honest and authentic imagery, to tell the Truth for you because that Truth, my friend, is the only “insight” that really matters in this business.

3. Play with language. When I lose faith in the direction of current poetry, I turn to the Irish and Irish-American poets. As a culture, it seems, their ears seek the nourishment that so many of the cochleae of mainstream poets lack. For the sake of their music, John Keats, Gerard Manley Hopkins , Emily Dickinson, Dylan Thomas, John Berryman, Sylvia Plath, Stanley Plumly, Amy Clampitt, Nancy Willard, Anne Bradstreet, Robert Morgan, John Wood, and Mark Doty can be your bright and polished touchstones as well. One more thing: often music is coaxed out through revision. Some sounds have a logic of their own. If you don’t revise, then there’s an awful lot of pressure on that first draft.

4. Write from your instincts, not your intellect. You have to learn everything you can about the craft and then forget what you know. Turn off your rational side, the critical voice (this is what William Stafford was talking about when he suggested a poet should lower standards). The impulse to write should come from an urge rather than a concept. Not just emotional in nature, this urge builds like a huge wave swelling inside you and pushing you onto the page. It will not be denied and if it isn’t released, it does not subside but only returns stronger. This is why I’m against scheduling daily time to write. Don’t force art into being. If you do, it most likely will come from your head instead of your guts.

But every yin needs its yang, every zig, a zag, and so on. That editor with the sharp eye and ruthless hand is who makes revision possible. Without him or her, the syllables never get counted, the meter never checked and rechecked, the language and syntax never tweaked, the concrete details never pushed beyond acceptable into breathtaking. Rather than seeing revision as the time “to fix everything wrong with the poem,” I recommend being deliberate in your intent. Narrow your focus with each run-through—just polishing the language or just looking for opportunities to extend existing metaphor. Reread with one goal in mind each time. I find that closing one door often opens another.

What is the best career advice that you dispense to your students?
Don't be in a hurry to publish.

“An editor is a friend who helps keep a writer from publishing what should not be published,” William Stafford warns us in Writing the Australian Crawl. I like this attitude better than seeing the editor or editorial board as gatekeeper, elitist snob, or ivory-towered, academic enemy. Let me confess: I am embarrassed by the first handful of poems I’ve published. They are God-awful. I’d like to think I have matured as a poet since those early publications when I find they are not up to par. This is a good thing. If my best work happened years ago, it means I’ve been coasting downhill ever since. You probably already know there is a lot of bad poetry being published (one reason for this may be that editors know beginners are likely to buy a bunch of copies of the issue they are in which generates revenue for starving literary magazines). Before submitting something for publication, see if it survives the test of multiple readings by multiple readers and multiple critiques; see if it survives the test of time, if the romance lasts past the honeymoon. Still strong? Then, and only then, you have something to share with the world.

Do you feel influenced by your peers to produce a certain type of work?
There's bound to be an influence in any MFA program, but at my school, McNeese State University, the director Dr. John Wood excelled at taking our poems on their own terms rather than make us all sound like him. Because it was a small program, he was more to each of us than a professor; everything I know about mentoring I learned from him. Also, I was lucky enough to be in the program when some very talented writers were my classmates. Currently, when I compose a poem, I'm writing for myself. Then I consider my audience as part of the revision process.

Describe your writing process.
I’m pretty slow; writing in fits and starts mostly, though once-in-a-blue-moon I get a draft in one sitting. I think adhering to a schedule would make it seem like a chore and could force a draft before it’s ready, and that damage would be hard to undo. For this same reason (the undo part), I try to forget my poems, and would never recommend memorizing one’s own because once that happens, it will be set in stone, closing the door on future revisions.

I’ll write down an image, a first line, a title on a scrap of something, then set it aside. I come back to it days or weeks later and one of three things happens: I’ll read whatever it is and throw it away; read it and add to it; read it and set it aside again (to percolate). I keep coming back and, if I’m lucky, instead of chucking it, I’ll make a file for it on the computer. This becomes a commitment of sorts: chances are much less that I’ll delete the file. Maybe this stop-n-go approach started when I first started writing (poetry) seriously (my first year of grad school), and my mother died mid-year. I had lots of poems that I could have written about that loss and started many, but few made it beyond the scrap of paper phase due to massive-sentimentality. Maybe that process stuck so I don’t get caught up in the honeymoon stage of creation…

I do most of my drafting and revising on a computer because the shape of the poem and unified line lengths are important to me. The shape is a restriction to free verse. Sticking to a certain line length tends to limit the range of syllables per line without me being a fanatic about meter. I try this for end rhyme too. A few of my Taboo [poems] are accentual or syllabic but mostly I “eyeball” it for a more casual feel.

What I don’t like about writing on a computer is that the file needs a name, and this is the first obvious prompt to give these lines or whatever-it-is a title. I may not be ready to give it a title but fine, whatever; it is a necessary evil. I suppose I could call it “draft #1” but I choose to try for a title at that point.

What is your favorite thing to do when you should be writing, but just can’t find the motivation?
Go play outside!

Why did you decide to join AWP?
Writing is a solitary process but AWP provides a community of like-minded people with the same love of literature and the imagination as mine. The conference, the Chronicle, and other offerings help me keep perspective when I'm adrift in an ocean of grading.

Would you like to share a project you are currently working on?
A series of personae poems and some poems on place (Norway, the West Coast, the Yakama Indian Reservation)

What is your favorite line from a book?
W. H. Auden's "About suffering they were never wrong,/the Old Masters."