All About the AWP Conference:
How to Swim in a Sea of Writers 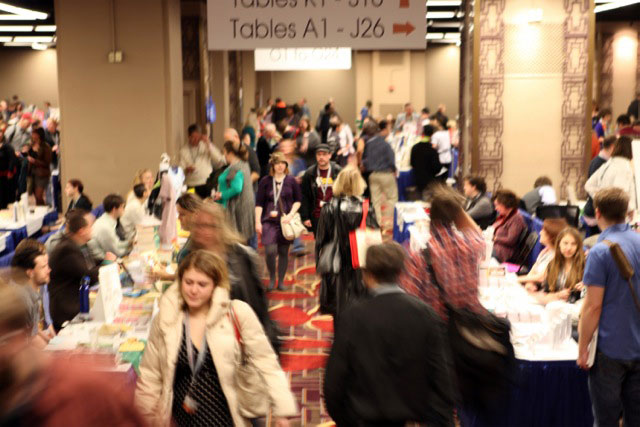 The first year I attended AWP, I hated it. There were so many people, everywhere, and they were impossibly chic, so that made them even more intimidating. Their eyeglasses, I noted, were particularly sophisticated, as were their shoes, often pointy and heeled. I kept getting lost because the book fair was in four rooms. I didn’t know anyone and I spent far too much money and it was impossible to attend every event, panel, reading, and party I wanted.  I was too shy to approach the writers I very much wanted to approach and there was a particularly sad incident at one magazine’s bookfair table, where I tried to purchase the magazine, and the sunglasses-indoor-wearing graduate student slouched behind the table couldn’t be bothered to feign alertness or take my money.

With each year since, however, the conference has become more enjoyable. I have become more realistic about what I can accomplish over a mere three days of literary debauchery. I’ve tried to overcome my reticence about introducing myself to fancy writers to varying degrees of success, and I’ve learned about the best and worst parts of the conference.

Without a doubt, the best part of AWP is how so many of your writer friends are in the same place. You will get to see them while walking around the convention center, at readings and panels, in dark alleys, and often, they will ply you with drinks and you them. It’s a grand reunion, every single year.

Many of the writers you admire will be in attendance, and most of them will be warm and approachable and totally willing to say hello.

Not all panels are created equal but when you find a panel with people who actually prepared and have insightful things to say, there’s a lot to be learned.

The bookfair is a sprawling joy—editors from all the magazines and small presses you can imagine are there, hawking their wares and generally willing to offer a kind smile. Attending the bookfair is a great way to learn about new magazines publishing exciting work, and there are usually great discounts to be had on both individual issues or books and magazine subscriptions.

The dance parties are always hilarious—rooms full of sweaty people dancing awkwardly to hit music. The word spectacle comes to mind. Get in line for the cash bar early because it will be long, all night.

There are a few less than ideal things about AWP. So many of your writer friends are in the same place, and you will get to see them, but often, it will only be for a few minutes, in passing, or amidst a throng of other people. Quality time is scarce.

It can be overwhelming to be surrounded, constantly, by so many people while feeling the need to be “on” and “perky.” This is, rarely, a writer’s natural state.

When a panel goes wrong, it goes terribly wrong, and you’re forced to sit through seventy-five minutes of awkwardness from people who clearly don’t respect the audience, droning on and on about nothing of relevance to the panel’s theoretical purpose.

If you drink, you will find yourself increasingly hungover with each passing day. The mornings get rougher. By Saturday night, your feet are going to hurt and you’re going to be sick of other people, no matter how much fun you’ve had. This is why room service and Pay Per View exist. Treat yourself.

Some Dos and Don’ts:

Do drink a lot of water. Go offsite to buy bottled water because the convention center and hotel will charge exorbitant prices.

Don’t thrust your unsolicited manuscript into an editor’s hands. It will be awkward for both of you.

Do visit the host city for at least an hour or two. There is life beyond the convention center.

Don’t try to attend everything. It’s not possible. Instead, pick a few panels and offsite readings to attend and leave the rest to possibility.

Do acquire a good tote, and on Saturday evening, ship home all the books and magazines you buy.

Don’t pretend to have read someone’s book if you haven’t. Don’t be sycophantic or use flattery as social currency. You can and should engage writers in normal conversation. Writers are people, too.

Do have fun and do not take the conference too seriously. Do carve out quality time with your friends when you can—a quiet hour for coffee or a meal far from the hubbub of the conference.

Roxane Gay lives and writes in the Midwest.

Is there any topic Roxane Gay writes about that isn't insightful, coherent, and just plan pleasurable to read? Excellent advice capping off a spot-on summary of the convention.

I was just going to write the same thing. I can't even make it to AWP this year, but I feel calmer anyway for having read Roxane's guide.

Thank you, Roxane Gay: easier now, to anticipate and perhaps to plan...well, at least I have a new set of spectacles aka Lisa Robertson. Signed, Always An Outlander XRSS