On the Enchantments and Uses of Bad Writing 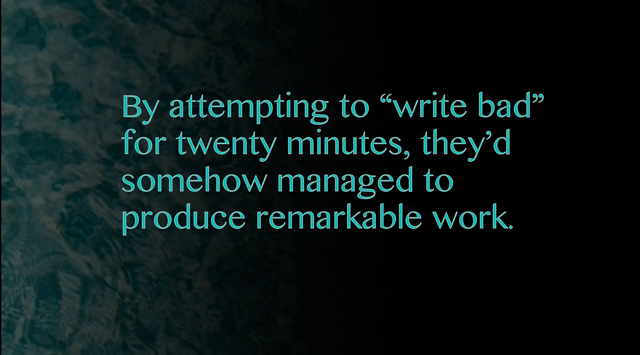 My students were initially horrified. As the piece grew more and more absurd, they began to laugh, then to howl.

I then asked my students to do an in-class writing exercise. “I want you to write the worst sex scene you can. Go over the top. Get completely disgusting. Make ‘A Seminal Release’ read like Faulkner.”

When it came time for people to read their work, the results were astonishing. Yes, they’d camped up the prose and the sex acts (as I’d ordered them to). Despite their best efforts, though, the scenes almost inevitably grew tender, charged, and often lyric.

The students themselves were dumbstruck. By attempting to “write bad” for twenty minutes, they’d somehow managed to produce remarkable work.

Because nearly all genuinely bad writing arises from a self-conscious and overweening desire to write well. That’s why we muck up our sentences with self-regarding metaphors, leap into scenes before orienting our readers, and choose words that sound good but are imprecise.

When I tell students to write badly I am essentially relieving them of the burden of writing well. This causes them to relax, to stop judging their sentences, to surrender to the improvisatory storytelling mode that produces the most natural and effective prose.

But I don’t just use bad writing excerpts as prompts for workshops. I also produce a tremendous amount of bad writing myself. In fact, if some poor graduate student were assigned to do an audit of my entire literary output over the past twenty years, this person—before killing themselves—would find that about 70 percent of what I write is dreck.

And I know I’m not alone. If you go visit the archives of your favorite writer, as I did with Kurt Vonnegut several years ago, you will find a treasure trove of unpublished work. And, if you’re anything like me, you will be heartened by this discovery. It’s a great relief to realize that all those published writers we idolize aren’t cranking out epic prose every day at the keyboard. Sometimes, they’re stinking it up, just like we do.

Let me take this a step further. Rather than running away from our own bad prose, we should—after letting it sit for a time—return to the scene of the crime.

That’s what I did a few years ago, when I started writing a column for the website the Rumpus called Steve Almond’s Bad Poetry Corner.

The premise was pretty simple. I republished a bunch of the horrible poems I’d written in my mid-thirties.  But I also included brief essays about why the poems were so terrible, and just as importantly, what was happening in my life when I wrote them.

My basic theory is that most pieces of failed writing—whether stories, poems, or novels—are usually attempts to tell a story that the author simply wasn’t ready to tell yet.

This is why so much of my bad poetry is clogged with overwrought language, because I’m stonewalling basically, trying to sound profound and beautiful rather than telling the truth.

Writers early in their careers are naturally eager to improve and to have their talents validated by publication. I get that.

But too often in the process, we look to published writing as the path to improvement. If we just read enough Vonnegut or Jane Austen or Lorrie Moore, we’ll be able to write with their style and wisdom.

My own educational experience tells me that writers learn far more when they turn their attention to flawed writing.

In graduate school, for instance, I spent a tremendous amount of time critiquing the work of my classmates. Often, I would write a four-page, single-spaced critique of a ten-page story.

I did this mostly because I wanted to seem like a serious student, and to convince people that I was generous soul.

Regardless of my motives, writing these critiques taught me more about writing than reading Saul Bellow’s books, or churning out my own awful drafts. Because I was forced to articulate precisely where and how and why my classmates’ efforts were falling short, which is how you develop a critical faculty.

I also read hundreds of submissions for a literary magazine. I’m sure I spent plenty of time bitching about this, but it was as useful as anything I did in grad school. Because while you usually can’t see your own bad decisions on the page, they are quite obvious when someone else makes them.

And believe me, when you read a dozen manuscripts with weak narrators, or cardboard villains, or ostentatious language, you become determined not to make these same mistakes.

This is why, when I teach students over the course of a semester, I emphasize the value of critique as paramount. The students who write the best critiques—that is, the ones who pay the closets attention to flawed work—are the ones who improve the most quickly.

My own belief is that writing is too intimate and arduous an activity ever to perfect. We need to stop viewing our task as the production of transcendent work. Instead, we should emphasize the process as a gradual reduction of our (necessary and inevitable) imperfections.

I realize how frustrating it can feel to produce weak work. Believe me. But I’ve also come to accept that bad writing doesn’t just mark a creative dead end. It’s a necessary station on the path to good writing.

Steve Almond is the author, most recently, of the story collection God Bless America.