Rocks in a River, These Hands Held Out to Each Other:
The Creative Writing Community 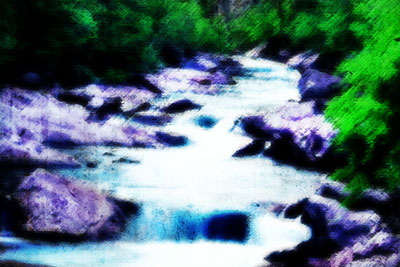 I have two answers to questions that seem to alternately stump or delight my audiences whenever I read or speak. One, that I don’t have an MFA and two, that I love Facebook.

Real writers have MFAs, most are members of writing groups or have designated readers of works-in-progress, and many eschew Facebook, Twitter, and all other forms of social media. (Real writers also do things like this: show up, plant backside in chair, stare at the blank page, and/or write every day. They usually do these things with an accompanying collection of tics—the latte flavor of the season, this chair in that coffee shop corner booth, after, not before, yoga—in a venue decorated by totems. Whenever I come across one of this black-bedecked tribe I run back home to peruse want ads for a job that might more suitable for my undeserving writerly self who should, surely, be quarantined and trammeled by a dull desk-job involving numbers and graphs). Clearly, I am not qualified to wear that rarified habit of a real writer. And yet, I do. And yet, there I am, standing in front of a group of people talking about writing. How did I get there? The simplest answer is that I got there because (a) I write, and (b) I belong to a pretty extensive community of writers.

Having grown up elsewhere, and therefore without the American idea that if I have a dream then there must be institutional affirmation for this in the form of a conferred degree or certificate, I did not know there was such a thing as an MFA program. I wrote because I loved to read and eventually I grew to love to read what I wrote; which meant that somehow I had to write things worth my own time and attention. The moment I reached the point where I felt that what I was writing may be worth someone else’s time and attention, I looked around for those people. For me that came in the form of applying not to an MFA but to a conference of writers; namely, the Bread Loaf Writers’ Conference in Ripton, Vermont.

The instincts that lead me to that conference have never failed me. Being among other writers, without any specific need for the approval or sign-off of any particular entity (agents, editors, professors, publishers), but rather the celebration of the written word and our love for it, has been the best inspiration for my work. The writers I met there grew exponentially as I placed myself not as a writer with a personal agenda of self-aggrandizement, but a writer among writers. Picture the rocks in a river and you will understand: we rocks (writers), of varying hue, girth, width and striation, tumble the waters (words) differently, but those waters live both upstream and down, they evaporate and come back to earth, they feed the soils and they make things grow and sometimes they come down hard and drown our harvests. The rocks, too, break down, splinter, are dislodged, pushed downstream, and eventually turn to sand and disappear. That river, that riverbed, remains, and there are other mountains that will supply the movement and disturbances required.

Understanding this eternal verity was critical to my own development as a writer. It is what has prompted me to remember that the unasked for favor granted to a younger or less-established writer is often more intrinsically pleasing than the favor asked for on our own behalf. It makes me seek out and read the work of writers others recommend, it convinces me that liking someone else’s fiction is not enough, I should tell others about my discoveries, it convinces me that going to poetry readings is sometimes a more soul-sustaining endeavor than simply fraternizing with those who write fiction and personal essays as I am inclined to do. It makes me say yes to things that may once have seemed like “too much work;” things like traveling five hours round-trip to speak to a group of high school students for payment that is less than the cost of travel or, more often, nothing at all. It makes me buy books that I can’t always afford, read them when perhaps I could do more writing, and spread my arms wide as I possibly can to make a circle that encompasses as much of this world of words and people who love them. I do this because it is only when I can see and embrace that world that I can place myself within it.

Last Thursday, I was riding the subway with one of my senior creative writing majors at Columbia - a real talent and one who will go far if he can get out of his own way - and he looked astonished when I told him I commute to NY from Philadelphia.  (Just as an aside, ever notice how New Yorkers are perpetually baffled that the world does not end at the edge of its boroughs?) As I recounted the innumerable reasons why I find myself at events or gatherings that aren’t always convenient for me, or even involve me at all, I realized that there has never been a single event to which I have gone where some new experience has not opened up for me, be it an invitation to read or speak, an offer of help, or the opportunity for me to connect writers with one another. The same is true of the time I do invest in sharing myself on Facebook or other social networks. Many of my favorite stories or essays have been solicited because someone liked the person they get to know via those channels. I’ve been to some of the most entertaining parties in my life solely because the hosts felt they would like to have the person they see on Facebook sit at their dining tables. And many of my favorite writers are friends whom I have met because I was willing to assume that we did not have to meet in person to help one another.

In a field where there are no guarantees of any sort, where today’s award winner is tomorrow’s horrified whisper, where the golden rule is that there isn’t one, the only way to take a giant leap of faith into the unknown is the presence of that net created by our inter-connectedness, these hands held out to each other. You jump off the ledges of your fear because you know it exists. And you can only know it exists if you have participated in its creation.

Ru Freeman’s creative/political writing appears internationally, and her novels, A Disobedient Girl (Simon & Schuster, 2009) and On Sal Mal Lane (Graywolf, 2013) are published in English and in translation. She blogs for the Huffington Post on literature and politics, is a contributing editorial board member of the Asian American Literary Review, and teaches creative writing at Columbia University. You can find her at www.rufreeman.com.

There are of course accomplished writers with advanced degrees and those without. Your salient comment: "I write" is the difference maker. As William Zinsser wrote in On Writing Well, "There are all kinds of writers and all kinds of methods, and any method that helps people to say what they want to say is the right method for them." Merry New Year.