Kindergarten, When You’re a Writer and a Solo Mom 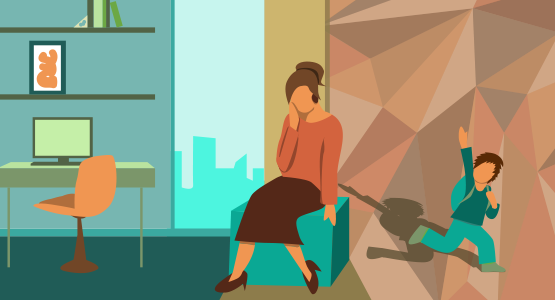 At the door we say goodbye. He hugs me. I tell him I love him, hand him his lunch. He’s already shouldered on the backpack. His teacher shakes his hand, as she shakes the hand of all the children and wishes them good morning. He goes into the classroom determinedly. He doesn’t look back.

This scene is being replicated everywhere this time of year—children going off, parents and guardians waiting anxiously in the hall before turning away—but for my son and me, it’s a little different.

I’m a single mother, and these years before kindergarten? These have been the hardest of my life.

I’m not sure if motherhood was one of my particular dreams, but solo motherhood definitely wasn’t. When my son was quite small, I was left to do what I already had been doing largely alone: pediatrician visits, dentist appointments, play dates, park trips, cooking and cleaning up three meals a day, interminable loads of laundry, the long long days and the interrupted nights.

What I wasn’t left to do was work.

When I became pregnant, I was midway through a PhD program in English/Creative Writing. I had just finished my coursework. Perfect, I thought. I can read for my exams while caring for a newborn! I was so naïve. Most students read a book a day to prepare for PhD exams; I was able to get through a book a week, maybe. We had no childcare plan in place, no babysitters lined up or interviewed, or even advertised for. I had thought my baby would just sleep. I had thought my husband would know what to do.

I did work, but the new work I did wasn’t great. It was error-ridden, rushed, the product of an exhausted and under-stimulated mind, and my productivity diminished as my confidence took a nose dive. Nobody wanted work from me.

Disappointingly and shockingly, I was expected to just drop out—of the literary scene, of academia, of my life. It was assumed I would be a ghost of my former self, including my writing self. It was assumed that motherhood would be everything, but it wasn’t, not for me. I didn’t have a brain transplant; I just had a baby. I was still a writer, one who worked and published, but I was seen only as parent.

People don’t invite new moms to parties—and they don’t invite new moms to do readings—or at least in my experience, they don’t reschedule once they find out there’s a baby who complicates things. My second, full-length book of poetry was published right after my son was born, and the book sunk like a stone. My work wasn’t solicited. I wasn’t asked to be on panels. I wasn’t out and about, even on social media, so people stopped looking. People stopped asking. As a new mother, I was counted out.

In their mid-thirties, women disappear from the workforce in alarming numbers because employers—including universities—don’t support mothers. Mid-thirties are the age when we’re supposed to be hitting the strides of our career, but it’s also the time when we’re “supposed” to have children. This creates a conflict for women—overwhelmingly, only for women. Men don’t disappear from jobs in their mid-thirties; men get promoted.

My university certainly didn’t have parental leave for graduate students like me or for undergraduates; they only instituted six weeks paid parental leave—as a “pilot program,” not even full official policy—for faculty (plus administrators and “some” staff) in 2013. A resource page for pregnant students? It lists a link to the office of disabilities.

Hint: pregnancy is not a disability—and it shouldn’t be placed squarely upon the woman.

As my son grew older, it became harder for me to write. Never a great sleeper, he was taking shorter naps, then no naps. My schedule became a patchwork of desperation. Like everywhere in America, there isn’t enough daycare in my town, and the daycare we have isn’t affordable. There is one center with a sliding fee scale, for which I signed up when my son was born. But nearly six years later, his name never made it to the top of the list. A couple I know signed up for the waiting list a few years ago, and the woman isn’t even pregnant yet.

When my son was almost four, I found a community center preschool, which was affordable and ended being much-loved by my son and me. But it was only twelve hours of care a week, minus the half an hour every day it took me to drive him there and pick him up. I supplemented with a scattershot of babysitters, when I could find them and find enough money to pay them. My parents would babysit when they could, but they live hours away. I did play date swaps with sympathetic parents, and I signed my child up for soccer and gymnastics in part so I could snatch twenty minutes of frantic writing time on the stands.

Sometimes after dropping my son off, I wrote in the lobby of the community center, to avoid losing time driving home and back. I wrote with the sound of basketballs rebounding behind me, people passing with sneakers slung over their shoulders. While my child played on the play structure, I frequently wrote at Burger King, where it is not uncommon to see people occupying corners for hours, reading the same newspaper again and again, in an attempt to stay warm, to stay dry, to have somewhere to be.

Anyone who thinks you can work with a small child around doesn’t have a small child. When he is awake and I am the only one near, I need to be with him, physically and mentally. That’s not an emotional idealization of parenthood—that’s just facts. If I’m preoccupied with my computer, he will be somersaulting over the couch. If I’m busy taking a call, he will be climbing the cabinets. I’ve heard of introverted children who play quietly alone in their rooms, but I have an active, social child who’s on a first-name basis with everyone on our street, including the bus drivers and cats. He likes people and he likes activity.

But my son knows that I write. He knows what I do, and he knows the importance of art in our lives. I found my own books on his shelves. Without saying anything to me, he took some author copies out of my room and shelved them in his room, next to The Boxcar Children. He won’t let me move them back.

He begs for new stories every night, and my command performance as storyteller has forced me to think fast, invent fast, faster than I have ever thought. Being a writer who’s a solo mother has taught me a lot like that. It has sharpened the drive in me. I have wanted to be a writer since I was my own son’s age, but now the drive that burns inside me is the searing will to survive—not only as a person thrust into difficult circumstances, but as an artist. I refuse to let single motherhood kill me. And I refuse to let it kill the writer in me.

I cried when I had to turn down twelve readings, most of them paying gigs, for my book published a week after my son was born; there was no one to watch him so I couldn’t go. I cried, mostly from tiredness and back pain, when I wrote two PhD dissertations (after scrapping the first one) and a novel manuscript with a nursing baby strapped to my chest. I cried when I turned in the first draft of my dissertation, and the committee remarked on how many typos were in the manuscript. I cried maybe the first, second, and third time I lost out on a job for which I had interviewed to a young childless man. I cried in the shower or I cried while doing the dishes—times when my son couldn’t hear. I cried when deadlines slid by and I missed them. I cried when it was 9 or 10 or 11 at night, and my child was finally, finally asleep, but I was too exhausted to think. I cried when a case manager said, You can do this. I cried at the support from my small, Appalachian town, which is a constant, near-daily outpouring.

A lot of people told me I would cry on the first day of kindergarten, an all-day, free place for my son to receive learning and care. But people have different kinds of lives, different struggles, different stories. This is mine: We marched up to that door. And we didn’t cry.

Alison Stine is a writer, artist, and journalist. Her awards include an NEA Fellowship, an Ohio Arts Council grant, a Wallace Stegner Fellowship, and runner-up in the Power Literary Reporting Award from NYU Journalism. Her essays, articles, and poems have appeared in The Atlantic, The Nation, The Toast, The Kenyon Review, The Paris Review, Tin House, Talk Poverty, GOOD, and others. Her most recent book is a novella, The Protectors (Little A, 2016). She writes as a Communications Fellow with the Center for Community Change, and lives in the foothills of Appalachia with her son.

Thank you, Ali, for this true portrait of single working parent life!