The Other Side of the Game: Reconciling My Reading and My Rearing in the Literary World 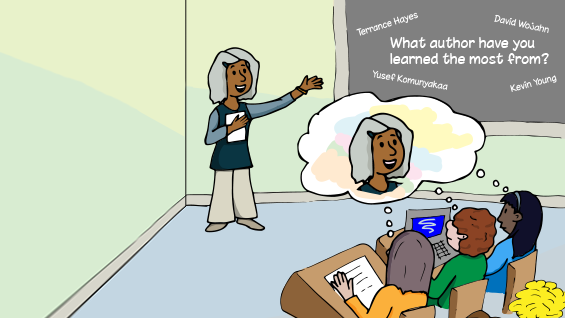 I try to avoid being photographed when possible, and thus most pictures I see of myself are ones I was not aware were even being taken. One such recent snapshot shows me standing next to Charles Wright the night of his final presentation as Poet Laureate of the United States. Framed with us in the photo is Michael Collier in the foreground and Robert Casper and David Fenza chatting in the background—the Poet Laureate, head of the Library of Congress’s Poetry and Literature Center, the director of Bread Loaf, the director of AWP . . . and myself. It is the kind picture a humble boy shows his grandmother. (Look at my baby with all those important men!) Absent the veneer of titles, these men are friends, colleagues, and mentors of mine, but considering the image with that lens of association is what makes me self-conscious about picture. As a portrait of influence and mentorship, it belies something of the actual journey—and, most importantly, the guides—that lead me to whatever place I currently occupy in the literary world.

As an undergraduate at the University of Virginia, the two exhibits of opulence that most astounded me were the dining hall buffets and the library collections. While I did not horde food, I often took books (ones I couldn’t believe were so readily available to me) and hid them in secret spots throughout the Alderman Library stacks. Thomas Sayers Ellis’s The Genuine Negro Hero, Terrance Hayes’s Muscular Music, and Yusef Komunyakaa’s Neon Vernacular were among my stashed collection. The striking contrast between that group of authors and the writers who were teaching and mentoring me was gender. I cut my teeth in poetry with Lisa Russ Spaar (who was the first writer with whom I ever took at workshop) and Rita Dove (whose presence was one of the primary reasons I fought my way into UVA). I knew of Rita Dove because of the time I spent in my first poetry community, sophomore year of high school, which was organized by Ms. Magdalene (who, fittingly, did not last long on our all-boys, Catholic campus). And though Dove bled across any compartmentalization because of her stature, I had begun to subconsciously separate my influences (the men) from my teachers (the women) and allot reverence accordingly. Nevertheless, it was Lisa Spaar who really groomed me to write with greater technical attention (the sharpness of her lineation and phrasing from poems like “Anorexia” in her first book, Glass Town, carries through to her brave new work in her forthcoming collection Orexia), and Rita Dove who charged me with larger conceptual and moral challenges to tackle in my writing (often developed during the hours she spent listening to my nonsense in her office).

It is highly possible that I entered graduate school with this bias—one I want to call subtle though it was not. I have my boxes of books from that period that attest that I was, beyond the compulsion of syllabi, reading contemporary female poets. (Looking through those books now, I see Kathleen Ossip’s The Search Engine and Mendi Lewis Obadike’s Amor & Flesh.) But the work I was reading most attentively, those were works by male writers. Nonetheless, again, an equal, if not greater, portion of the writers mentoring me during my time at Indiana University were female, though maybe even those relationships had become compromised. Whether it was a function ethnic, class, or gender differences, I cannot say I was as open to learning from Maura Stanton and Cathy Bowman as I was from John McCluskey, David Wojahn, and Kevin Young. I cannot rationalize or absolve myself of that feeling by suggesting humans are, more often than not, more comfortable engaging with a like “kind,” because I know now, and sincerely believe, it is the artist’s responsibility to extend his or her work and curiosity beyond the comfort of like kinds, especially when that artist occupies a position of societal privilege.

This partiality, as far as it relates to gender (for the racial significance I had understood for some time), became clearer in my mind as a result of experiencing my first faculty hire in the final year of my time at Indiana University. During the on-campus phase of the hire, one of the candidates, a heterosexual male, responded to students’ questions about the lack of female writers in his teaching presentation by suggesting that there were not many female poets after Emily Dickinson worthy of significant consideration. (That candidate was the one eventually chosen by the English Department faculty. In her notes, one of my MFA colleagues who also attended the talk wrote, “Is he operating in a tradition that believes women are not adequate companions?” and “Does this man have a girlfriend?”) Though I was taken aback that someone could reach that stage of a university job interview, let alone a writing career, espousing such things, the question I had to pose to myself afterwards was much more troubling. How dissimilar are my silent biases to the sentiment he voiced. And do they not, in effect, have the same impact on a writer’s development (and, heaven forbid, on those that writer goes on to groom)?

I was fortunate enough to live with two female writers—Sara Jane Stoner and Mary Austin Speaker—during my time in Bloomington. The act of living with women was not novel for me as I was raised mostly by women, but to live with female artists, as a heterosexual man, was a deeply enriching experience for me. I imagine I might not have read much Gertrude Stein and might not have listened to any Sleater-Kinney or Kimya Dawson had we not been exchanging intimate libraries, and I wouldn’t have had the opportunity to read and wrestle with Mary and Sara Jane’s own work (Mary’s repurposing and imagistic play with archetypes as in her cowboy poems or Sara Jane’s bulldozing critiques of the hetero-capitalist worldview in her book Experience in the Medium of Destruction). That type of wrestling is central to the development of what I would call my emotional negative capability—the ability to ponder and, through empathy, internalize as sincere experiences that I, as a heterosexual man, may have yet to encounter or imagine (as opposed to seeking ways to merely analogize another’s experience to my own and, as a result, erase or invalidate the particular texture of that experience). A more timely example of this would be my experience with reading Claudia Rankine’s recent collection Citizen. Upon eventually reading the actual text, after having already read so much about it, I initially found it did not speak to me. I took the book as an attempt to communicate the psychological and visceral effects of racism in a manner targeted at Caucasian liberal sensibilities, and thus I felt very subordinate as a type of reader for the book. I also began notice that while many of my African American female literary colleagues were writing thoughtful and grateful reviews of the work, many of my African American male colleagues (the heterosexual ones in particular—Cyrus Cassells wrote a thoughtful review of the book) barely deemed it worthy of critical attention. (And VIDA has been documenting the gender imbalance in book reviewing, but I digress.) Of course, that was not scientific sampling, but there was something there. What? I went back to the book and eventually came to the conclusion that there was a pronounced and, likely, conscious focus on microaggression in Citizen. The manifestation and impact of microaggression differs vastly between the lived realities of African American women and African American men. That perspective, which validates rather than diminishes the weight of microaggressive transgression, cast the potential impact of the book in a different light for me, and rather than allowing my latent biases as a heterosexual black man in my body, in America, to limit my experience of the book, I could begin to see in it what others—particularly those African American female colleagues—saw. But again, I probably could not have done that if I had not been pushing myself to be more aware of my gendered blind spots as a reader and a thinker.

To this day, Lisa Spaar and Rita Dove remain mentors to me. (I purposely did not apply for a recent poet hire at UVA because I cannot fathom attempting alter the nature of the rapport I have with them—becoming colleague instead of student.) And if I am ever deathly in need of a read on a poem draft, the person I trust most with my work is writer and long-time friend Sandra Beasley. My best work, in terms of bringing book manuscripts together, happened under the eye of editor Erika Stevens. The writer and prolific critic Grace Cavalieri has been a long-time supporter of my work. The poet Samantha Thornhill is my deepest confidant in this literary world. Lucille Clifton is my patron saint as far as trying to be human through, or in, poems is concerned. And, yes, there is Kyle Coma Thompson (who I’ll always think of as the Qui Gon Jinn to my Obi Wan) and Charles Rowell (whose Callaloo introduced me to Lucille Clifton) and even Kevin Young (who, while we were not very close, really modeled—through his syllabi and book recommendations, reading beyond one’s gender experience). It is clear to me that I don’t even arrive at the aforementioned moment when I am being photographed in the Library of Congress without the work and the work of so many women. And yet what is true about the photograph as a representation is that many women still feel locked out of significant circles in the literary world, ones to which I have access. Maybe it is not something the female writers you know will shout (for fear of being dismissed or “marked” as pushy or disruptive), but it is something a number have admitted to me in confidence.

It’s safe to presume there is someone who will read this and respond, “so this is your self-righteous pronouncement that you understand women?” Not at all correct, and not at all the point. Understanding, when it comes to people, is a process as we are not constants. And if one is a heterosexual man, to whom society’s aesthetic and popular opinion bend, he should always be challenging his processes. It is something I have to consider when I am writing my syllabi, or making recommendations for our Visiting Writers Series, or editing POST NO ILLS, or judging a grant panel. How do my reading, awareness, and consideration of women writers match the degree to which they have shaped my literary world? It is a potentially uncomfortable reflection to face, but the redress, when necessary, I have found to be work that brings me closer to being whole as a writer, or simply as a human being.

Kyle Dargan is the author of four collections of poetry, Honest Engine (2015), Logorrhea Dementia (2010), Bouquet of Hungers (2007) and The Listening (2003)—all published by the University of Georgia Press. For his work, he has received the Cave Canem Poetry Prize, the Hurston/Wright Legacy Award, and grants from the D.C. Commission on the Arts and Humanities. His books have also been finalists for the Kingsley Tufts Poetry Award and the Eric Hoffer Awards Grand Prize. He is currently an associate professor of literature and director of creative writing at American University, as well as the founder and editor of POST NO ILLS magazine.