Color Me In, Please! 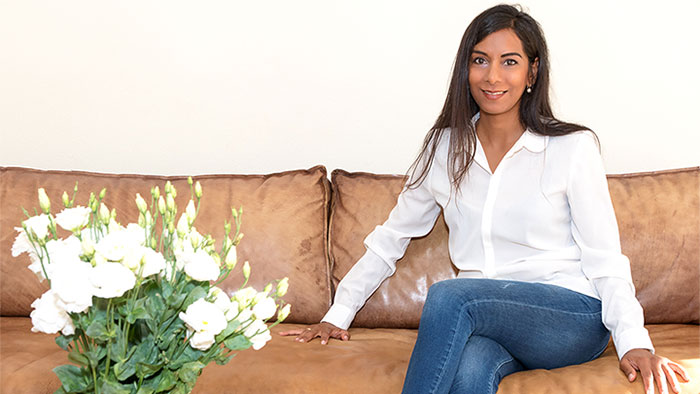 Instead of the tropical landscape I was used to, I was reading about European children who frolicked about in the pale white snow. They failed to reflect the life around me.

I grew up in Mauritius, a small tropical island in the middle of the ocean, where access to books, most of which were imported, was not only a privilege few could afford but also seen as a luxury.

My first memory of books was at my elder cousin’s house. As I carefully opened the thickly bound encyclopedia, I was greeted by a plethora of words and pictures that danced in front of my eyes, beckoning me in. I was instantly seduced. It was love at first sight. Not a single one of those words made sense to me, and yet I held the dusty old book reverently in my hands, like a prized possession.

I caressed the leather-bound cover, turned the pages lovingly, and slowly traced the words with my small fingers until eventually, I plucked up enough courage to ask my cousin if I could borrow it.

“But why? You don’t even know how to read!” he exclaimed.

I begged him until he finally gave in. For me, it didn’t matter that I didn’t know how to read, and until I learned how to do so, it was enough to feel the stash of printed sheets bound together, to inhale the moldy smell of paper, and to stare at the pages and the pictures. I was struck, and yet fascinated, by just how foreign the characters looked. And soon enough, it became evident that the supply of books available at my private school was nowhere near sufficient to quench my thirst for reading.

Saturday was market day, so I asked my mother if I could tag along to visit the library, which unfortunately turned out to be a complete disappointment. We found out that my local library, which was free and accessible to all, was sadly not well stocked. The few meager shelves containing children’s books were falling apart, and there was nothing more frustrating than to take a book out, eager to delve into it, only to find out that it had several pages missing.

So we decided to join a private library in town. First, we had to pay a membership fee, followed by a deposit, and a few rupees for each book taken, with a maximum of half a dozen or so books allowed per child. Every Saturday, Mum took us to town where we could visit the privately owned library where I would happily hand over most, if not all, of my pocket money. I would usually devour every single one of the series and comic books by Sunday and had to count the days until Saturday, the highlight of my week, would finally come.

Despite being an avid reader, I realized that during my entire childhood, I had not read a single book, with the exception of some school textbooks that had been published locally simply because there were hardly any. All the books I read as a child were imported from Europe, with stories that transported me to a world far beyond my tiny island, where I felt I was no longer bound by its geographical confinement. As much as I enjoyed reading these wonderful stories, they made me feel alienated, as I could not see myself or my surroundings in any of those adventures.

I used to read about children running wild in the alpine forests in autumn, picking baskets full of chestnuts and gathering logs for the fireplace. After hours spent in the fog, the young characters gathered around a roaring fire, in which the chestnuts crackled, scrambling for warmth. I was reading adventures of blond and fair-skinned children with rosy cheeks fresh from the cold while I was dripping in sweat in my shorts and T-shirt, with the tropical heat pressing against my skinny dark shoulders.

I started to ask myself why I didn’t look like them. Why wasn’t I gallivanting about in the snow, having fun like they were?  It was only when I was a young adult that I finally got to taste the soft, buttery taste of freshly roasted chestnuts that crumbled in my mouth as the fond memories of my childhood reading came flooding back.

When you are at an impressionable young age, you want to see yourself, as well as others, in books in order to figure out who you are and who you could aspire to be. Seeing your life reflected in the stories that you read validates your own. Not having been exposed to books about people that looked like me left me feeling inadequate, as if people like me were not important or good enough to be featured in those books.

In an article for the New York Times in 2014, the late American children's author Walter Dean Myers, the former US National Ambassador for Young People's Literature, highlighted that fewer than 3% of children's books published the year before featured black people. "Books transmit values. They explore our common humanity. What is the message when some children are not represented in those books?" he asked. "Where are black children going to get a sense of who they are and what they can be?”

Today, I would like my children to see themselves represented in the books they read, to see the world from more than one point of view and not have to feel estranged from the other children featured in the books. I want them to embrace and celebrate their colorful heritage.

So when my then-five-year-old came home from her German kindergarten one day, after a coloring-in session, and asked me why she was different from the other children, I felt that I had no choice. I had to write her a story1 about tolerance and acceptance. She had every right to see herself in a book, and not only to see the differences but the similarities too.

Priya N. Hein participates in the International Writing Program (IWP) Women’s Creative Mentorship Project—University of Iowa. Born in Mauritius, she is the author and illustrator of several popular children's books and short stories published in English, French, Mauritian Creole, Rodriguan Creole, and German. The Mauritius Institute of Education, the University of Mauritius, and the Ludwig-Maximilians University in Munich use her texts as teaching materials. She has participated in numerous book fairs and programs for Mauritian radio and television, was shortlisted for the Outstanding Young Person’s Award and Mauritian Achievers Award, and was nominated by the National Library of Mauritius for the Astrid Lindgren Memorial Award. She has recently been elected member of the Integration Advisory Council for the City of Garching, near Munich, Germany, where she lives with her husband and two children.