Hunker Down & Write: A Tribute to Philip F. Deaver 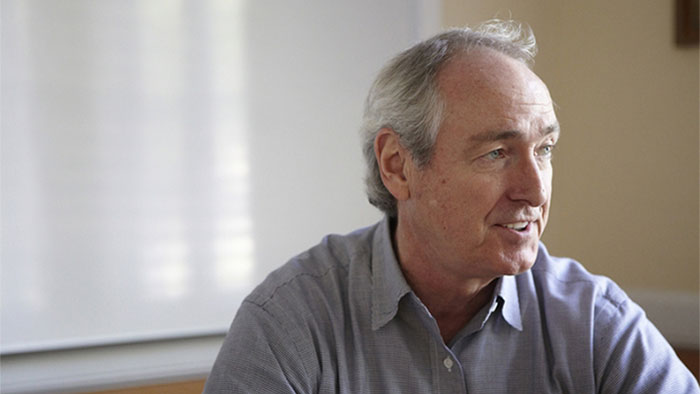 Only a handful of people who come into our lives make a true difference to us. For me, Philip Deaver was one of them, both professionally and personally. I met Phil about twenty years ago, after my husband and I had moved to Orlando, Florida. I’d never been the sort of writer who participated in writers’ groups but, being new in town, I gave it a try. I joined Phil’s First Friday group at Rollins College, which was an informal gathering of students, alumni, and writers from the community. We shared poetry, and Phil would mindfully listen, offer tips, and push our writing to the next level. His feedback was always enthusiastic. When he spoke, people listened because his words glowed with respect, admiration, and wisdom. His passion for writing and the writing process was palpable. He was a writer’s writer.

Phil had an uncanny way of making writers feel good about their work. He always identified something positive in each poem, while at the same time tactfully dispensing constructive comments to some of the community’s best and most sensitive poets.

At the time, I was in my forties and hadn’t had a poem published since high school. The first poem of mine Phil critiqued, “Park Avenue,” was about an upscale shopping district near the campus, nestled by a beautiful park. The poem depicted the men seated on the benches and passing judgment on women’s parking skills. I wrote about how I was a great parallel parker and how my father had taught me well. The poem got a lot of laughs because it highlighted a moment many women experience and relate to. Phil laughed while I read, and with his help I got that poem published, which sent me on a successful publishing path. I owe so much to his inspiration and encouragement.

Phil and I became fast friends and frequently met over coffee to discuss his favorite subjects—the writing process, literature, and politics. He loved talking craft and literary successes. We often laughed about my preference for creative nonfiction and his for hiding behind the mask of fiction. He called me brave. I called him brave.

An accomplished writer himself, he won the 1988 Flannery O’Connor Award for his collection Silent Retreats. While short stories were his genre of choice, he also published works of poetry, such as How Men Pray, and creative nonfiction, such as Scoring from Second: Writers on Baseball, an anthology on baseball.

Phil was born and grew up in Tuscola, Illinois, and some of the poems and short stories were set there. Since 1998, he’d been a professor in Rollins College’s English department, as well as the writer in residence. He was a constant source of encouragement for all his students and instrumental in growing Rollins’s creative writing program, where we worked together to bring esteemed writers such as Richard Ford, Michael Cunningham, Ann Beattie, and many others.

Besides being an inspiring mentor, Phil was a great friend. In 2001, when I was diagnosed with breast cancer, I decided to follow my lifelong dream of pursuing my MFA in writing. I was accepted into Spalding University’s charter program. During my program, I needed some support, and the program director suggested I work with a local professor in Orlando. That’s when I contacted Phil, and we became quite close during the process. He helped me bring my thesis to fruition. He taught me the fine art of “chunking,” which is a way to organize a paper by physically cutting each paragraph out with scissors and rearranging accordingly. I remember chunking on the floor of a conference room at a local writer’s conference we were attending, and I am forever grateful for this creative trick. My thesis became my first memoir, Regina’s Closet, for which Phil wrote a wonderful blurb. He and I communicated regularly, and his emails often ended with, “I hope you are fine.”

Phil frequently spoke of his dream of starting an MFA in Writing Program, but unfortunately he ran out of time. His lack of time for writing often frustrated him. One New Year’s he wrote, “We only live one life. Looking back, I have the nagging sense that I haven't achieved in writing what I once thought I would, so this year’s resolutions were a little come-to-Jesus party.”

Once, during an interview, Phil was asked if he were a character in Fahrenheit 451, what work(s) he would memorize for posterity. Here’s his reply:

Forty Martyrs Suite, unpublished novel in stories by me

In 2006, I received a second cancer diagnosis, and Phil encouraged me to hunker down and write. Like me, Phil was an advocate of writing for healing. I was a regular blogger and was blessed to have him as a faithful reader. I reposted his admonition, “When it hurts, write harder.” In response to my blog posts, he always sent a few encouraging words, such as,

Over these past years, you have really taken off as a writer and as a teacher and as a lifelong student (your pursuit of the doctorate). Your blog has become a must read, and your broad set of interests surely inspires all writers we know.  I hate it that you are ill, but I am so impressed at how you are determined to make the best of every day. I sweat those visits to the Mayo right along with you.

With Phil’s encouragement, I decided to pursue my PhD in psychology, researching the healing and transformative aspects of memoir writing.

In 2015, I was delighted when Phil told me that his novel, Forty Martyrs, which he’d been working on for years, would be published by Burrow Press. “I’m working on it now,” he said, “so it is as good as I can get it.” Phil was a perfectionist when it came to editing, which is probably why it took so long for his novel to get out there, but I’m so glad it is. I reviewed the book in my June 2018 newsletter.

Even before he became ill, Phil made references to the speed of life and impending death. Once he said that, while he loved being a professor and sharing his passion for writing and literature, “There’s no doubt in my mind that I want writer to be on my headstone.” In the same vein, in 2013, he told me that he found his handwriting deteriorating. He said that the headstones of both his parents were engraved with their signatures in their own handwriting. “I wanna do that, too,” he said, “but I better make the facsimile soon.” I’m not sure if he had the chance.

I once wrote a blog about finding your bliss. Phil sent me an email in early 2016 saying, “The key to finding one's bliss is writing one's stories.” There’s no doubt that he had many more stories to write. Phil inspired so many people! Michael Steinberg, for one, said, “Phil was one of those rare human beings who combined wisdom, compassion, and a fundamental humility with an incisive wit, a tough-minded tenacity, and a probing intelligence… I always saw him as a generous and stable presence—someone I could go to for advice, or simply for lively, stimulating conversation.”

When I visited Phil last year, I knew it would be the last time I’d see him. He was living in an assisted living facility in Orlando. When my friend Darlyn and I got out of the elevator, Phil was seated in the public seating area, holding a cane. He barely recognized us. We announced our names and asked if we could go to his apartment. With no words exchanged, he stood up and we followed him. I asked if we could sit on his leather sofa, and he said sure. “I’ve a copy of Forty Martyrs for you to sign,” I said. “Sure,” he responded and reached out for the book. There were about five books turned face down on his desk, along with his favorite Smith Corona typewriter. I asked him what he was working on, and his answer was vague. He signed my book, but when he wrote, “Dear Diana, thank you for buying my book,” three times, I knew that something was really wrong with him.

“You know,” said Darlyn when we left, “if he could have written something warmer to you, he would have.”

On April 29, 2018, when I received the text message that Phil had passed away, I was on the plane from my home in California to Fort Lauderdale to await the birth of my third grandchild. For the entire flight my eyes were filled with tears. All I could think about were Phil’s words, “When it hurts, write harder,” which for years had been posted on a sticky note above my computer. I believe in those words, but on that flight my pen became paralyzed. I couldn’t write. I was in too much shock. How could Phil be gone? He was only seventy-one.

When Phil’s son Michael, about whom he’d often spoken, asked me to speak at Phil’s memorial, I was honored. The gathering filled Knowles Memorial Chapel at Rollins College. Other speakers were Michael himself; Phil’s daughter Laura; his long-time friends Billy Collins, Paul Friedlinger, and Lezlie Laws; and his sister, Maureen Purcell, who recounted how his disease robbed him of expression, and how difficult that was, but that he heard everything.

As one life ends, another begins. The circle of life is a constant reminder. I learned from Michael that Phil had become ill at about the time of his granddaughter’s birth. Life just has its way. And now, perhaps Phil is resting peacefully and once again rereading one of his favorite books, Anna Karenina.

Note:
There will be an off-site reading of Phil Deaver's work during AWP 2019.

Diana Raab, MFA, PhD, is an award-winning poet, memoirist, blogger, speaker, and author of eight books and over 1,000 articles and poems. Her new book is Writing for Bliss: A Seven- Step Plan for Telling Your Story and Transforming Your Life. She’s also the editor of two anthologies, Writers on the Edge: 22 Writers Speak About Addiction and Dependency and Writers and Their Notebooks. Raab’s two memoirs are Regina's Closet: Finding My Grandmother's Secret Journal, and Healing with Words: A Writer’s Cancer Journey. She's a regular blogger for Psychology Today, Thrive Global, and Elephant Journal.

Phil was a school administrator and one of my fiction workshop classmates decades ago at Murray State University in Kentucky. Some of his writing then would become part of his Flannery O'Connor Award winning book. We stayed friends. I saw Skidmore (the character) coming into being at the very start.  Miss him. Thanks for this. Luanne Smith