Event Title: #AWP18 Keynote Address by George Saunders
Description: George Saunders is the author of four collections of short stories, a novella, and a book of essays. His newest work is the novel Lincoln in the Bardo, which is one of the most highly regarded books of the year, and is currently a New York Times bestseller. Another of his publications is the short story collection Tenth of December, winner of the 2013 Story Prize and the 2014 Folio Prize. The recipient of a 2006 MacArthur Foundation Genius grant, his work has appeared in the O. Henry, Best American Short Story, Best Non-Required Reading, and Best American Travel Writing anthologies. He is the recipient of a Guggenheim Fellowship and was named one of the 100 Most Influential People in the World by Time in 2013.
Location: Ballroom A & B, Tampa Convention Center, First Floor
Date & Time: Thursday, March 8, 8:30 p.m.–10 p.m.

Q: What book or books that you’ve read over the last year would you most highly recommend?
A: This year I really loved, and was changed by: Stamped From the Beginning: The Definitive History of Racist Ideas in America by Ibram X. Kendi; Reservoir 13 by Jon McGregor; Exit West by Mohsin Hamid; Hunger Makes Me a Modern Girl by Carrie Brownstein; The Argonauts by Maggie Nelson; Swing Time by Zadie Smith; The Locals by Jonathan Dee; Three Lives by Gertrude Stein; Theft by Finding by David Sedaris; Bring Out the Dog by Will Mackin (in galleys); Manhattan Beach by Jennifer Egan; Heads of the Colored People by Nafissa Thompson-Spires (in galleys); and The Last Interview by James Baldwin.

Q: What are a writer’s main responsibilities in this particular cultural moment?
A: I’d say they are the same old ones: tell the truth; make your prose more beautiful and precise; through specificity, identify and eliminate any laziness or habituality in your thinking. I feel like events of the last few years have highlighted my own shortcomings vis-à-vis my understanding of my own country. So that gives me something to work on (ha, ha, ha, sob).

Q: Has public funding for the arts made a difference in your life and career as a writer?
A: Oh, yes. I just think of how many plays, operas, documentaries, books would never have seen the light of day without public support. I also think so much of our current political confusion can be traced back to our negligence about teaching the arts in our schools. Art is, ultimately, the most capacious way human beings have developed to self-assess. So, when, culturally, we turn away from that, it should be no surprise when we suffer the effects of fuzzy, materialist thinking. The discourse has gotten cruder, less subtle, uncomfortable with ambiguity, and incurious. That might be the definition of anti-art.

Q: When AWP was found in 1967, there were a dozen creative writing programs, now there are approximately 1,800 undergraduate and graduate programs. What do you think has changed for readers and writers since creative writing became ascendant as an academic discipline?
A: I think it’s an interesting question and an important one to be asking. I think there are more and better-educated readers in the country, and much more interest in, and respect for, the creative process. Especially the short-story form has benefitted—it is a perfect form to study within the workshop form, and so we’ve developed a high level of sophistication around it. On the negative, side, I sometimes fear we are creating a sort of “soft-landing” zone around our art—creating a system of programs and magazines that allow for careers to take place almost entirely within that zone and not find a place outside, in the broader culture. And a related effect might be the assumption that an artist’s life should/can take place away from the center of the culture—which then might have the effect of speeding our self-marginalization. I’m not sure where I land on this argument. After over twenty years of teaching in an MFA program I am more certain than ever that these are essential and wonderful. But I find myself trying to work these concerns into my teaching—trying to take them into account, I guess.

Q: If you could run into any author, contemporary or historical, at #AWP18, who would it be and what would you talk about?
A: I wouldn’t mind running into Dickens in the bathroom and cornering there at the hand-dryer until he told me how it felt in those weeks he was writing A Christmas Carol. Was it fun? Did he do a lot of rewriting? Did he write by computer or by hand? How had he managed to live to be nearly 200 years old, and did he know of a good vegetarian place in Tampa? Just the standard writerly questions. 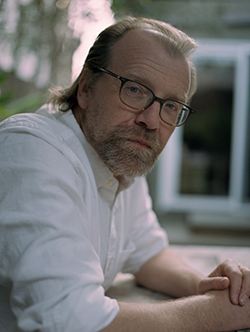 George Saunders is the author of a novel, four collections of short stories, a novella, and a book of essays. His long-awaited novel and most recent book, Lincoln in the Bardo, was awarded the 2017 Man Booker Prize. Saunders’s collection, Tenth of December, was the winner of the 2014 Story Prize and the 2014 Folio Prize. The recipient of a MacArthur Foundation Genius grant, his work has appeared in the O. Henry, Best American Short Story, Best Non-Required Reading, and Best American Travel Writing anthologies. Recipient of a Guggenheim Fellowship, he was named one of the 100 Most Influential People in the World by Time in 2013.
(Photo credit: Chloe Aftel)