Thinking Through the Long Poem 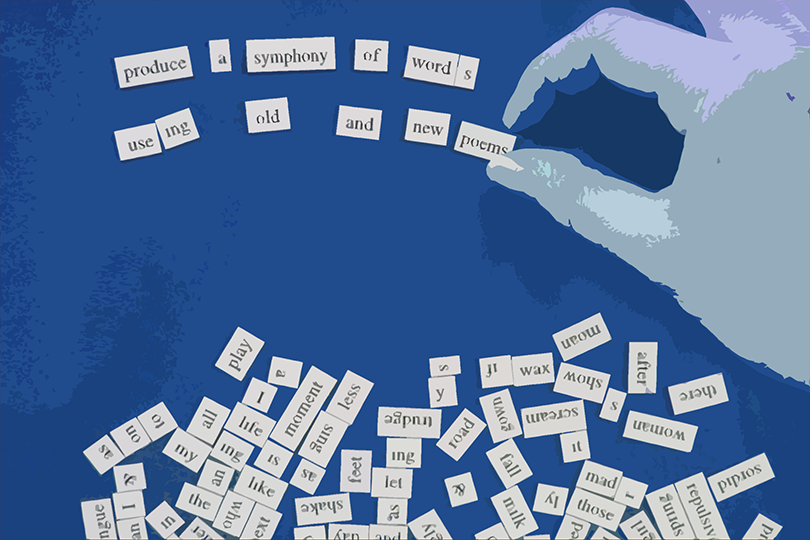 The last section of the Everyday Creativity class I taught at Saint Mary’s last Fall was concerned with the long poem. The students selected from a mass of writing they did over the course of the semester and tried to figure out how, by selecting and altering and adding new works and framings, to compose their own long poems. We read and discussed poems by Alice Notley, William Carlos Williams, Ben Lerner, Olena Kalytiak Davis, Jae Choi, Ben Lerner, and many others, as models, to see what these poets do, how they keep their poems together, how they keep them moving, how they keep them going.

It’s been my experience that in the course of writing a lot of poems, it is natural to get into the habit of being on the lookout for an ending. As you write, you can sense them coming, and learn to gently or abruptly move the poem in the direction of the perfect dismount. But it’s interesting sometimes to push past that, and see what happens next. It’s most often nothing, or maybe a new poem, or maybe the real poem. But sometimes you get on a roll, and ideas stretch out and echo and deepen. Of the many reasons poets might write long poems, one might simply be to find out what happens when you don’t stop.

Williams began writing one of the greatest American long poems of the 20th century, “Asphodel, That Greeny Flower,” in March 1952 on a hotel menu in New York City. This is the way he had written so many of his other poems: an obstetrician, constantly busy receiving patients in his office or traveling at all hours of the day and night to attend to his patients and deliver babies, he wrote whenever the poetic impulse came upon him, sometimes in the moments between seeing patients in his office or pulled over on the side of the road, sometimes on his typewriter, but often on scraps of paper, receipts, prescriptions, or whatever was available.

But for some reason with this poem he did not stop with whatever he had scribbled on the menu, or go back later to turn it into a slightly longer, “polished” poem. That is to say, he did not “revise.” He continued, and one can hear in the structure of the entire poem the halting, delayed, equivocal syntax of its beginning:

Of asphodel, that greeny flower,
like a buttercup
upon its branching stem-
save that it's green and wooden-
I come, my sweet,
to sing to you.
We lived long together
a life filled,
if you will,
with flowers.  So that
I was cheered
when I came first to know
that there were flowers also
in hell.

During the years he was working on the poem, Williams suffered several strokes, the most serious of which in 1952 paralyzed one side of his body. He wrote the poem over the next few years, slowly typing it using one finger, on his non-dominant hand. Its halting yet graceful syntax seems inseparable from that physical fact, as is the retrospective inclination of the speaker. “Asphodel” is full of many ideas and impulses, not the least of which is to apologize to his wife for a life of at least mental if not actual philandering. But truly, from the very beginning, the main engine of the poem is a relentless, gorgeous syntax, moving the mind down the page.

The first long poems I wrote were based on a process of collage and reclamation. I would take a notebook and write in it at a certain time every day, usually just ten lines very quickly, in order for at least a few moments to access some hidden and buried part of my consciousness. Then, after several weeks, I would stop and begin to assemble the poem by selecting one or more lines from each day’s writing. I would end up with a long piece of writing, not a poem at all, that seemed like a total incoherent mess, because it was. But if I stared at it long enough, certain resonances and connections would start to emerge, and I would carve those out of the poem, and write into them. Some of those poems were radically shortened, but occasionally a longer poem would result.

I also got into the habit of stopping every year or so and taking failed poems–of which there were always oh so many–and doing the same thing with them, just putting them all together and then trying to see what was there. My goal in both of these processes was to make the end result seem organic, as if it had been written in one sustained act of thinking and dreaming.

The one exception to this process was the title poem of my 2010 book, Come on All You Ghosts. In Fall 2008, I was flying every week back and forth between Houston, where I was teaching, and San Francisco, where I had just moved. After so much time in airports and rental cars, never being in any one place for longer than three or four days, the whole season began to take on a hallucinatory quality. Sometime in November, I remember a phrase started to come to me at odd times. At first I thought it might be a song lyric, or maybe something from someone else’s poem, and I Googled it in order to discover its origin, but apparently it had come from somewhere deep in my own mind.

On one of my last plane trips back from Houston I remember distinctly the phrase coming to mind again, very strongly, as if I could actually hear a voice saying it, only to me. And there on the plane I instantly knew that this was going to be the title of a long poem and of the book I was working on, that this poem would be the last poem in that book, that its form would be in tercets, and that it would be in five sections. I knew exactly how the poem would begin, and what would happen in each section. I got off the plane and started writing the poem in my head in the taxi on the way home. Over the course of the next few days I finished it, and sure enough it was in five sections, in tercets, and became the title poem of my book.

I think the only thing to be learned from this (other than that occasionally in life we get very lucky) is that this poem was easy for me to write because there was something about the rhythm of the phrase that exactly embodied the particular way my mind needed at that moment in my life to move. The phrase which bubbled up from my psyche was a kind of incantation, or personal prayer, which meant nothing in isolation, but into which the poetry I needed to write at that time fit. Now that it has happened to me, I hear this same effect in many long poems, like “Asphodel,” a way of thinking enacted in the syntax that propels the poem along, no matter how widely it ranges, for better or for worse, as long and far as it must go.

Williams's “Asphodel” finishes its third section in a kind of false ending to the poem, with some writing that seems frankly forced and exaggerated:

Are facts not flowers
and flowers facts
or poems flowers
or all works of the imagination
interchangeable?
Which proves
that love
rules them all, for then
you will be my queen,
my queen of love
forever more.

Yikes. My students and I puzzled for a long time over how in the world Williams could have left this in the poem. Some suggested it was ironic, others that it was part of an interdependent system, no parts of which could be altered without disrupting the whole. I don't know. It seems to me that he was moving relentlessly ahead, from there into the Coda, which itself ends with the true ending of the poem.

Asphodel
has no odor
save to the imagination
but it too
celebrates the light
it is late
but an odor
as from our wedding
has revived for me
and begun to penetrate
into all crevices
of my world.

Here Williams is once again fully inside his syntax and way of thinking, and is, I think, his best self as a poet and also perhaps as a person too.

Matthew Zapruder is the author of four collections of poetry, most recently Come On All You Ghosts, a New York Times Notable Book of the Year, and Sun Bear, Copper Canyon 2014. Why Poetry, a book of prose, is forthcoming from Ecco Press in 2015. He has received a Guggenheim Fellowship, a William Carlos Williams Award, a May Sarton Award from the Academy of American Arts and Sciences, and a Lannan Foundation Residency Fellowship in Marfa, TX. An Associate Professor in the St. Mary's College of California MFA program and English Department, he is also Editor at Large at Wave Books. He lives in Oakland, CA.