From the November 2008 issue of AWP Job List. © 2008 The Association of Writers & Writing Programs. May only be reprinted with the permission of AWP.

Higher education is not recession proof. Eighty percent of college students attend public universities, most of whose budgets are being cut because state tax revenues are leveling off or declining.

Colleges and universities are immediately feeling the effects of the current credit crisis. Over the past several years, decreased state support and declining earnings from private endowments have taken their toll on public and private colleges, and recent events are compounding already difficult times. Former U.S. Secretary of Labor Robert Reich told the Chronicle for Higher Education (CHE) in March 2008, “Higher education is not recession proof. Eighty percent of college students attend public universities, most of whose budgets are being cut because state tax revenues are leveling off or declining… Meanwhile, many private colleges depend on endowments whose values are declining as stock and bond markets take a licking.”1

In a report by the CHE, colleges and universities have already taken steps to cut costs during the economic downturn, and these cost-cutting measures have already affected hiring and staffing decisions at a number of institutions.2 Several colleges have implemented hiring freezes, including Boston University, Cornell, and the University of Arizona, which has put a freeze on state-financed hiring. At the University of Maryland, where cost cutting measures have been in place since 2004, regents have increased faculty teaching loads by 10% on most campuses and 20% at research institutions. The voluntary measures the University of Maryland has put into action have paid off; the system has been able to freeze tuition rates for the past three years, which has generated goodwill among students and the lawmakers. Even so, the university has recently instituted a soft hiring freeze where administrators will review all hiring decisions.3 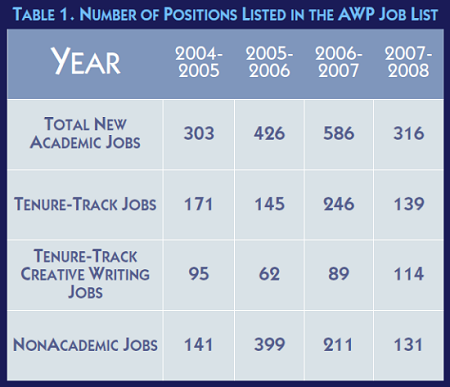 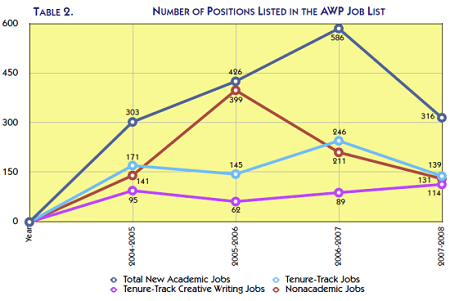 Many Colleges Cut Back in the Face of Economic Downturn

In addition to calling for a hiring freeze, Boston University’s president has shelved all building projects that have not already been approved. Similarly, Gov. Bill Ritter of Colorado put a moratorium on campus construction projects supported by taxpayers.2 Other universities who are facing uncertain financial times and budget deficits are considering more drastic measures.

According to the CHE, Georgia’s fourteen technical colleges will merge into seven,4 and state legislators in Michigan have already discussed with education leaders the remote possibility of shutting down one campus in their public higher education system.2 Twenty-two states projected budget shortfalls in October, just four months into their current fiscal years,4 and private institutions are not immune to the current turmoil. Past president of Lafayette College and senior vice president of the U.S. Chamber of Commerce, Arthur J. Rothkopf predicted, “If the downturn is extended, some financially weak private schools will be forced out of business.”5

Molly Corbett Broad, president of the American Council on Education commented to the New York Times, “… problems are serious enough that higher education is going to need help from the government.” She also predicted that some financially shaky institutions will be likely to seek mergers.6

David W. Breneman, a professor and program director in public policy at the University of Virginia told CHE, “Every downturn has its own unique features, but this is a financial meltdown the likes of which we really haven’t seen since the Great Depression.”2 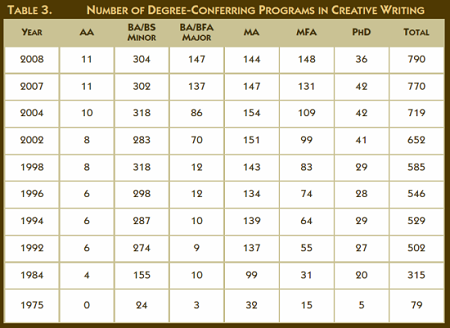 How Cost Cutting Will Impact Hiring Next Year

One of the ways universities are tightening their belts during the downturn is by hiring more adjunct faculty and allowing open positions to remain unfilled. Last year, Portland State University in Oregon elected to hire more part-time faculty instead of filling tenure-track positions. In response to the crisis, campus leaders told the CHE in October 2008 that as an alternative to hiring tenure-track faculty, they would consider increasing the number of adjunct instructors teaching on their campuses.2 Faced with a hiring freeze, Valencia Community College in Florida has approved a radical temporary measure allowing adjunct professors to teach five or six courses to accommodate increased enrollments.7

Other struggling institutions are facing actual job losses as a result of budget shortfalls. the New York Times recently reported that the University of Florida cut 430 faculty and staff positions this year and that faculty and staff may face more layoffs in the year to come. The Times also reported that Arizona State University, faced with a $25 million budget cut coming on the heels a previous $30 million cut, has ended its contracts with up to 200 adjuncts.6 Job ads are starting to appear with language stating that positions will be contingent on funding. Robert B. Townsend at the American Historical Association, which has seen job listings in the organization’s publications decrease by 8% compared with this time last year, told CHE, “The big worry is whether these jobs will really be filled.”8

However, the flagging economy in certain states has been a boom to higher education institutions in states rich in oil and mineral deposits. A few states benefiting from booming oil and natural gas industries are predicting budget surpluses this year. Texas, Alaska, and Wyoming have seen growth in these industries and may not only have the opportunity to lure faculty away from schools that are facing cutbacks and budget shortfalls, but may also have the funds to build new facilities to attract students and staff. North Dakota State University, where the economy has been boosted by price of corn and other crops, hired more than thirty new professors last year and is looking to add twenty-six new faculty positions this year. Molly Corbett Broad, president of the American Council on Education, told the CHE that universities in states where the economy is growing will definitely try to attract professors from less fortunate states. “Of course they’re going to look, especially to places where they may be in an economic decline,” she said.  Already the State Board of Higher Education has proposed a 23% budget increase systemwide to North Dakota State University to help the university grow. The University of North Texas is also recruiting top faculty as it invests tens of millions of dollars into new research projects.4 Wealthy private colleges and universities with reserves might also benefit from the current situation. As job openings evaporate and faculty pay stagnates at many universities, schools with healthy budgets will be able to offer more attractive compensation to lure prominent researchers and professors.

In its 2006 “Report on the Survey of Earned Doctorates, the Association of Departments of English,” ADE reported that just 55% of English doctorate recipients had found definite employment after graduation. ADE’s report did not breakdown this statistic into part-time, full-time, tenure-track, or non-tenure-track work. The report also states that between 1984 and 2006 only “about half of any given year’s graduates report(ed) having definite employment at the time of gradution.”9 The report clarifies that employment was not necessarily in higher education.

Although the MLA’s “Report on the Job Information List” published in September 2008, pointed to a 1.8% increase in jobs advertised in 2007-08 (1,646 jobs), the report shows a decline in tenure-track jobs. The 1.8% overall increase is a continuation of a trend toward job listing increases from a recent low in 2003-04. Since that low, job announcements have increased by 18.5%.10 English Departments were first able to index their listings by tenure status in 2004-2005. At that time tenure-track announcements made up 79.8% of the JIL’s job ads. (1,193 out of 1,497 jobs.) In 2007-08, the percentage of tenure-track job listings dropped 4% to 75.6%. (1,244 out of 1,646 jobs.) Since the numbers of advertised job listings in JIL has been growing in recent years, the percentage decrease in the number of tenure-stream listings have been driven by an increase in jobs advertised as non-tenure track. However, the MLA reports that a large majority of jobs listings were at the assistant professor rank with 88% of those openings listed as tenure-track.

In addition to the erosion of tenure-stream jobs, English faculty face additional challenges. Faculty salaries in English still lag behind other fields. Data compiled by the CHE places English language and literature faculty salaries are at the bottom of the pay scale at 4-year institutions. The average English instructor’s salary is $39,834 compared with the $55,364 average salary of Engineering instructors or the $42,420 average salary of instructors in Communications, Journalism, and related studies. The economic disparity continues at all levels of employment. Full-time Assistant Professors in English earn $6,743 less on average than Assistant Professors in Area, Ethnic, Cultural, and Gender Studies. At the top levels of employment, English Professors make $4,671 less than Philosophy and Religious Studies Professors.11 (See Table 4.)

Almost all of the JIL and AWP Job List announced positions were full-time positions, so the reports do not track department’s hiring and use of part-time faculty. Ted I.K. Youn, a professor of education and sociology at Boston College, who studies academic markets and careers concluded that since the 1970s, “Perhaps the most significant change has been that many vacancies left by retirees seem to have been filled by part-time or non-tenure-track faculty.”12 According to data compiled by a 2005 U.S. Department of Education’s Staff Survey, part-time faculty now account for 48% of faculty appointments and non-tenure-track jobs now comprise 68% of all types of faculty appointments.13 According to the CHE, part-time instructors made up just 34% faculty in 1984. From 1987 to 2005, the percentage of tenure-stream faculty dropped from 66% to 52%.10 (See Table 5.)

It appears that as tenured faculty in English leave or retire, their vacancies are either the victim of natural attrition or are being filled by non-tenure stream faculty. The Association of American University Professors estimates that a university can hire eight adjunct instructors for the cost of one full-time faculty member. In How the University Works, Marc Bousquet speculates that in one generation, if current trends prevail, 80% of faculty will be adjuncts. 14 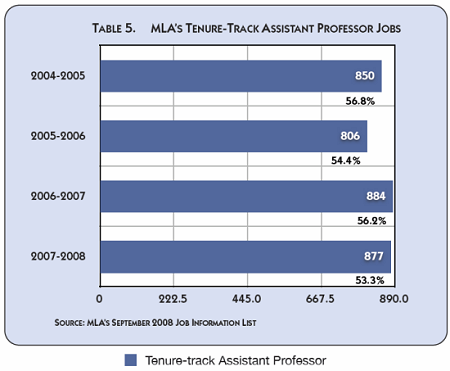 A former Associate Editor of the Writer’s Chronicle, Emily Lu has been a professional writer and graphic designer for the past five years. Currently a freelancer, she was most recently a Copywriter and Graphic Artist at the Wolf Trap Foundation for the Performing Arts.