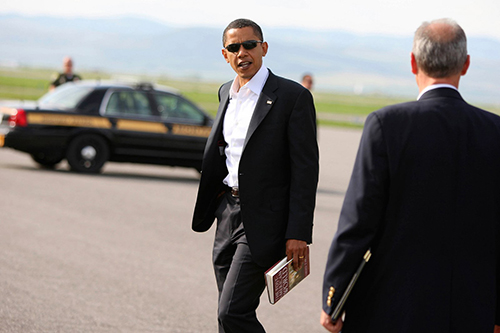 What will President Obama read during his sixteen-day family vacation on Martha’s Vineyard?

Well, according to his official reading list, the POTUS will be reading an equal mix of fiction and nonfiction—about 2,771 pages of it, that is. The list includes the following six books, all by American authors:

Most agree that the list reveals a president who has been more “bookish” than past presidents, particularly with his inclusion of fiction. Accordiing to Guardian writer Mark Lawson, it discloses a leader who is “serious” and “sophisticated,” with a touch of “self-aggrandisement.”

Here is Lawson’s verdict on Obama’s nonfiction selections: “The president’s trio of factual tomes . . . serves as perfect homework for his final 15 months in office,” he writes, adding that Ta-Nehisi Coates’s book on race relations and Elizabeth Kolbert’s book on climate change have been central to Obama’s presidency.

Ron Chernow’s Washington, however, “is the riskiest choice on the list because it invites suggestions of vanity and self-aggrandisement. . . . This is the literary equivalent of a selfie with a celebrity and, as he prepares to leave office, it is little surprise that the 44th President finds himself drawn to Ron Chernow’s biography of the first, Washington.”

What’s on your summer reading list? Let us know in the comments.