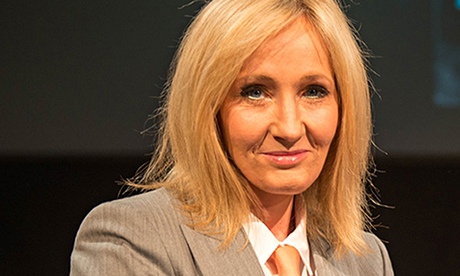 Dressed very business-like in suit and tie, J.K. Rowling made a rare appearance at the 2014 Harrogate Crime Writing Festival as her pseudonym Robert Galbraith to discuss her recently released mystery novels, The Silkworm (June 2014) and The Cuckoo’s Calling (April 2014) this month, which are installments in a series about a one-legged, former war veteran turned private detective, Cormoran Strike. Crime writer Val McDermid interviewed J.K. Rowling, and, instead of a live Q&A with the audience, read written submissions from audience members.

According to Mark Lawson at The Guardian, Rowling discussed her writing process, writers she admires, and future plans for her Cormoran Strike series: “Among other things, we learned that Rowling/Galbraith likes to do her/his own research, except for one plot-point in The Silkworm–a full English breakfast at Smithfield market in London–which she deputed her husband to consume. She is a fan of the English crime-writer Margery Allingham. She plans that Cormoran Strike books will eventually outnumber the seven Potters.”

The connection between Rowling and Galbraith was made by The Sunday Times of London in July of last year, when an anonymous tip led reporters to investigate and later obtain a confession from Rowling. “I had hoped to keep this secret a little longer, because being Robert Galbraith has been such a liberating experience,” she said. “It has been wonderful to publish without hype or expectation, and pure pleasure to get feedback under a different name.”