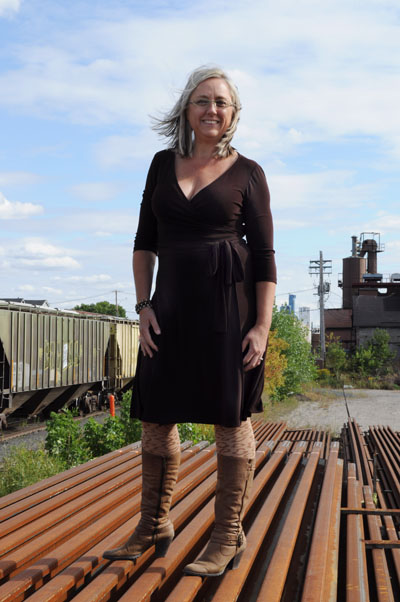 Barrie Jean Borich’s latest title is Apocalypse, Darling, a lyric narrative forthcoming in February 2018 from Ohio State University Press, the kickoff book in Machete: The Ohio State Series in Literary Nonfiction. She is the author of Body Geographic (University of Nebraska Press/American Lives Series), winner of a Lambda Literary Award in Memoir, an IPPY (Independent Publisher Book Award) Gold Medal in Essay/Creative Nonfiction and a 2013 IndieFab Bronze Award for Essays. In a starred review Kirkus called Body Geographic "an elegant literary map that celebrates shifting topographies as well as human bodies in motion, not only across water and land, but also through life."

Borich’s previous book, My Lesbian Husband (Graywolf), won the American Library Association Stonewall Book Award. Her work has been anthologized in Waveform: Twenty-First Century Essays by Women and in After Montaigne: Contemporary Essayists Cover the Essays, and has been cited in Best American Essays and Best American Non-Required Reading. She is the recipient of The Florida Review Editor's Prize in the Essay and the Crab Orchard Review Literary Nonfiction Prize, and her work has appeared in, Ecotone, The Seneca Review, Indiana Review, Hotel Amerika, TriQuarterly, Passages North, The Washington Post, and The Rumpus.

Borich is an associate professor in the English Department and MA in Writing and Publishing Program at DePaul University in Chicago. She leads writing workshops for graduate and undergraduate students at DePaul, teaches courses in LGBTQ memoir and the history and practice of the American literary magazine, and she edits Slag Glass City, a digital journal of the urban essay arts. A Chicago native, Borich lives with her spouse Linnea in the city’s historic Bryn Mawr District of the Edgewater Beach neighborhood, one of the most culturally and internationally diverse community areas of the city and few blocks south of the condo where the fictional characters Bob and Emily Hartley of the Bob Newhart show resided.