The Challenge is Respect

The Writer to Writer mentorship emails stuck in my head, red flags waving, so I clicked the link to fill out the application. It was long. The large text boxes implied it would take time and a lot of words. I would have to think. I answered a couple questions, went back to my novel. But I enjoyed thinking about what I would like in a mentor, even if I wasn’t really going to apply. I went back to the application a couple more times and answered each question at length, for myself, to see what I would say, finished it and left it at that, but the email reminders came, and then the deadline was a couple hours away. I hesitated, waited until the last minute. Why did I fill out the application for a mentor I didn’t even need? What would I do but waste a mentor’s time? I knew how to write, but I’d taken my current novel as far as I could on my own. I’d received feedback in workshops and at a conference, but it still wasn’t right. I’d applied to The Work Conference, and gotten in. I was moving outside my comfort zone. My blood felt thin. I opened the application for a Writer to Writer mentorship, closed my eyes and hit the submit button. I was uncomfortable, but I put it out of my mind and went about my days. I wrote.

Giving myself permission to consider myself a writer, when I was in my teens, was a passage, moving to a new space in my mind, and in the years that followed I stayed in the safe place where I was a writer to myself. I joined a writing group in college, and surrounded by other writers, moved through another door. I published. I was a public writer. But I went back to the safe place where I just wrote for myself as I got older and began a career unrelated to my identity as a writer. When my short stories kept getting too long, one of my good friends, a published author from my college writing group, gently suggested that I might be writing a novel. I didn't think I was capable of writing novels, and said so, to which he replied, “Why not?” And that phrase stuck in my head; why not write a novel? I could do that. I gave myself permission to write a novel and found the place where I was most at home: writing novels.

By the time I applied for a Writer to Writer mentor I had written two and a half novels. The first, 900 pages long, was my favorite, the one that taught me how to write a novel. The characters were alive, vivid, amazing… to me, but the novel was terrible. My second novel, Red Alaska, was the one I wanted to publish but it was too long, meandering. I cut out every scene that didn’t move the plot where I wanted it to go, and 40,000 words lighter it was a much better story. But it still needed work. I wanted to work, but I didn’t want to waste my time and wasn’t sure how to proceed. Maybe a mentor would be able to guide me.

Diane Zinna emailed that I had been selected as a mentee by an author, Benjamin Ludwig. She sent me information about him. I’d recently read, on Publishers Marketplace, that he signed a book deal, and I thought there must be a mistake. Benjamin Ludwig would not have time to be a mentor. But the email said he selected me based on my writing, and there was a sample of his writing too. It was good. He was good, but he was busy. I didn’t want to waste his time, and it wasn’t because I thought I didn’t deserve mentorship; it was because I learned through his application that he was already busy: a full time job, a family, a book in the works. When I emailed Diane to accept the mentorship, I resolved not to waste Ben’s time. I was still uncomfortable, but I didn’t know why.

Ben emailed me within minutes of my email to Diane. He was eager to get started. He asked if I wanted to follow the modules Writer to Writer provided. I did not. Since we decided to work together, I wanted to learn from Ben through our writing and experiences in the writing world, and following a prescribed structure would hinder the process for us, but it would also be a fallback if we got stuck. Ben looked at parts of my novel in progress, The Flood, but was hesitant to look at Red Alaska.

In the beginning we only emailed, but after a couple weeks we were texting and also talking on the phone. Initially, I didn’t want to talk on the phone because a voice in my ear without a person in my eyes is disorienting, but Ben insisted we talk, and it turned out to be a good thing, because sometimes it helped us sync back up when our words in email weren’t connecting.

Ben said we couldn’t work on Red Alaska unless I was emotionally prepared to make some serious changes. The words ‘emotionally prepared’ were disconcerting, and I knew all my hesitation from the moment I answered the first question on the mentorship application came to this: was I ready? And more than that, would I be able to open myself up to a major change? I asked Ben what he meant and he said nothing was at stake for my narrator. I would have to start the story at an active point in her life, not a passive point. After Ben and I discussed the situation on the phone and through email, I understood the problem on an intellectual level.

I said I was ready, even though I wasn’t sure, because to get to the next level in my writing I had to be emotionally ready, so I would make myself ready. And it was hard. Ben was specific: the character needed to be active, and when I sent him a rewrite he would say, “No, you must have misunderstood our conversation.” He didn’t let me skate by doing what I had always done. He told me being a good writer wasn’t enough. He told me to tell the story. He pushed me, uncompromising; he gave me persistent, respectful feedback. It felt relentless, and I didn’t like it, to be challenged every time, to be pushed until I thought I was at the edge, but he was always kind. He had chosen to be my mentor, in the little free time he had, and he took his commitment seriously. We both did. I persisted when I wanted to stop. I respected Ben and even as he pushed me, he said I could be better. And one day when I was so frustrated that I wanted to stop being challenged, I understood the challenge was the respect. Ben was not being paid to work with me. He was holding his hand to me and I could take it if I wanted to be a better writer. I respected him because he was choosing to be honest with me, not because he wanted to upset me, but because I told him I was ready, and he took me at my word. He respected me too.

What Ben explained during the hard days when he was pushing me to make my characters active was simple and obvious, and it hadn’t occurred to me, but once I was able to hear him, I understood. He said, you are already a good writer, now you have to be a good storyteller. My writing shifted, had been shifting the whole time we’d been working together. On the page, my characters had stakes. I could take them deeper and push them further.

When I told Ben I was going to rewrite Red Alaska, but I wasn’t looking forward to the time it would take, he reminded me I already knew the characters so well it wouldn’t take nearly as long as the first time. It has taken longer than I expected, but the writing is the joy. And now I have a new, better novel.

Being mentored allowed me to reach this new level in my writing. But for this mentorship to work, I had to be open to Ben’s challenge to be a better storyteller just as he had to be honest with me, and learn how to communicate with me in a way I could understand. Because we both applied for the mentorship we knew we were in this relationship voluntarily, but more, that it was a special place for a couple of writers to connect. I had to become active just like my characters; I had to challenge Ben too. Through the process I discovered Ben was not only a master of time management; he was a generous, skilled teacher, and a fascinating person. A trusted friend. Our match through the Writer to Writer Mentorship Program was a good one. We were up to the challenge and the challenge became respect. 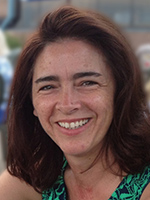 Colette Lunday is the Digital Collections Librarian at Lawrence University in Appleton, Wisconsin. She is on the board of the Fox Cities Book Festival, and she is a member of The Loft Literary Center and The Mill: A Place for Writers. Her experiences growing up in North Dakota and living in Alaska inform her work as a novelist. Many mornings she is up by 5:00 a.m., writing and drinking coffee while her dogs snooze under her desk.