AWP celebrates the Writer to Writer participants of Fall 2015. In this series of conversations, we invited mentors and mentees to share their recent experiences in the mentorship program.

We interviewed our playwriting pair, Dale Griffiths Stamos and Kelly Jo Eldredge, at the conclusion of the Fall 2015 session.

AWP: Going into this process, what did you expect to happen? How has the experience met that expectation, or what are some ways it has surprised you?

Eldredge: My expectations going into this process were fairly simple. I was hoping to get honest feedback and possibly some guidance on my first play. I knew that my biggest problem was that I tended to get lost in the story halfway through. Then, my interest would drop off and so would my writing. I was afraid I didn’t have what it took to come up with a good story, and that was a heartbreaking disconnect for me, because I enjoyed the process of writing so much.

The actual experience gave me far more than I could have imagined. Dale not only gave me great feedback, but she also taught me how to use some amazing writing tools that kept me on track. I found out through the steps we took together that writing really is a craft. It takes time and attention, and I was skipping over some of the most rewarding steps in developing a compelling story and characters.

I thought I enjoyed writing before, but now I can hardly wait for my writing time. I feel like I’m making real progress, and the fear of having nothing to say is melting away as I develop my skills.

Stamos: I would say that I was surprised at how quickly Kelly Jo and I clicked! It was easy and fun right from the get-go. She was extremely open and absolutely willing to grow as a writer. And she was also willing to get down in those trenches and do the work. These are essential traits for a working writer.

AWP: What are the aspects of the mentoring process that you feel have inspired you in your writing?

Eldredge: I think the opportunity I have had to witness how Dale works in the real world as a playwright has been very valuable and inspiring. She not only has shared tools of the craft, but she also shares what a typical day is like for her. I’m inspired by what she does, and I want to be involved in the same kind of creative collaboration.

Stamos: Oh my, yes, it feels like my days as a young playwright were only yesterday. Going back to an even earlier time, I was first inspired by the theatre when I took up acting in high school. At the time, while others read novels, all I read were plays and I saw the playwrights that I admired, like Tennessee Williams and Arthur Miller, as gods! I never even dared to dream I could do something like that. But a little while after college, while acting in a community play, the director said, “Let’s you and I write an evening of short plays, poetry and song” (I was writing poetry and songs at the time), so I tried my hand at creating these short little plays, and so did she and we interwove the music and poems. And then, brazenly, we cast it, rented a space and put it on! Well, that was it; I was hooked! I started seriously studying playwriting, joined a wonderful writers’ group, and have never looked back.

AWP: Kelly Jo, did you learn specific things about playwriting that you didn't know going in?

Eldredge: Oh, so many! First, I learned to start by getting a notebook and filling it with prewriting exercises. These have been so valuable in solidifying my premise, my characters, and my story. It hasn’t been easy, but Dale kept saying, “Just fill the pages. Don’t worry about it. No one is going to see this but you.” That was very freeing. I filled the pages, and my play has taken on a much more solid shape. I have gotten to know my characters. I have a solid premise. And I have storyboarded the whole play, so I have a roadmap. Of course, Dale did mention that map might change as I get deeper into the writing now. We’ll see!

AWP: Dale, do you still keep such a notebook?

Stamos: Every new play that I start, I use my pre-writing notebook. I still practice pretty much everything I have talked to Kelly Jo about, such as writing character bios, milestones, and monologues; asking myself the five key structure questions (Who is the protagonist, what do they want, what is in their way, do they get what they want, and how are they transformed?); as well as teasing out the all-illusive premise that will be the spine of my story.

AWP: How would you describe the dynamics between yourself and your mentor?

Eldredge: I think Dale is a very driven writer, which I greatly admire. So our sessions were structured in that she took me on a very clear path. I knew exactly what I needed to work on before our next phone call, and she gave me excellent resources to read in between. I like structure, too. I like to have a clear goal. Then I feel like I’m getting somewhere from week to week.

So there was structure, but on the other hand, Dale was also very open to my questions. We had fun, high-energy, familiar conversations, and she was always willing to answer my random questions or throw out an idea when I told her about what I was thinking about a character or scene. I enjoyed that give and take. Dale never told me what to do; she coaxed the creativity out of me.

I think the sessions were just the right length. Any longer and my head would have exploded! We have covered a lot of ground in the last few weeks. That said, I’m going to miss our talks.

AWP: Dale, do you see this relationship continuing after the program concludes?

Stamos: Not in a formal way, but I certainly hope we will check in with each other periodically. I would love to know the progress she is making! I particularly want to hear when she’s finished what she feels is a polished draft of the script, and when she takes it into readings and workshops, and what kinds of reactions she’s getting.

AWP: How closely did you and your mentor stick to the subjects of the modules, and how much did you deviate, and if so, why?

Eldredge: We made sure to at least touch on the subjects of the modules, but we were also very aware that I wanted to go back to the beginning and develop better prewriting skills. So some of the modules that involved later stages of writing and career we covered more lightly in order to get back to the big nugget of information I was learning for the first time, [which] was really the focus of our weeks together—the foundational, prewriting aspect of writing.

AWP: How important do you think feeling a certain personal "connection" to your mentor is, and why?

Eldredge: I think it’s critical. I connected with Dale’s energy and her easy laugh right away, and then I could relax and get to work.

AWP: Dale, did you get a sense of Kelly’s energy from her application or writing sample?

Stamos: I did actually get a sense of her energy from her application and her sample, though neither necessarily predicted how delightful she would be to work with. The application was clear in her goals and where she felt herself to be in her writing life in a way that made me feel I would be a good match for her. What the sample showed me was someone with an innate sense of dialogue, with lively characters, and with a great offbeat sense of humor! I knew these were great raw materials with which I felt confident I could work.

AWP: Kelly Jo, would you recommend Writer to Writer to others?

Eldredge: Absolutely! This has definitely taken my writing to a new level. Working with a professional of Dale’s caliber encouraged me to expect more from myself. I no longer feel like I just write on the side for fun. I’m a writer, and I’m proud of it! I know what that entails, and I’m willing to put in the work.

AWP: And Dale, do you have advice for writers who are considering being a mentor?

Stamos: I would say be open to the process. Certainly have a plan of what you’d like to happen, but also let the mentee and their particular needs lead you.

AWP: Has this experience changed you in any way?

Stamos: I don’t feel it has changed me. What it has done is re-enforce my absolute love of teaching and working with writers. In addition to my writing life, I work as a manuscript consultant/story editor, teach yearly workshops at the Santa Barbara Writers Conference (and sometimes during the year), and speak to writer’s groups. I love doing these things! Being a mentor added some new colors to the palette. It was really nice to have an ongoing every-other-week relationship where we tackled process, on-the-spot questions and dilemmas, and the thrills and challenges of the working writer’s life.

AWP: How do you see yourself moving forward with your work after Writer to Writer is over?

Eldredge: I now have made writing a priority, and that includes scheduling time every day to write. I can’t tell you how exciting it is to allow myself that space. I will finish my play and workshop it with trusted actors and writers and then look for theatres that may be willing to put it on its feet. I will also keep those notebooks going with new ideas. I even have an idea for a fiction novel that sort of appeared as I was going through this process. It has its own notebook now. 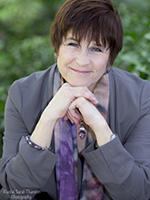 Dale Griffiths Stamos is an award-winning playwright, screenwriter, poet, and writing teacher. Her full-length and short plays have been produced throughout the U.S. and abroad; her short films have appeared in multiple film festivals; and her poetry has been published in a number of literary journals. Dale teaches "Story Structure for All Genres" yearly at the Santa Barbara Writers Conference and has been a guest speaker for various writing organizations. 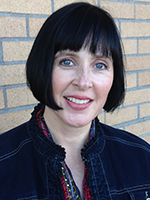 Kelly Jo Eldredge currently teaches in the Theatre Arts & Dance department at Red Rocks Community College in the Denver area. She has enjoyed a fruitful career in musical theatre, performing lead roles on national Broadway tours and in regional theatre throughout the U.S. and Canada.