For the Love of Literature 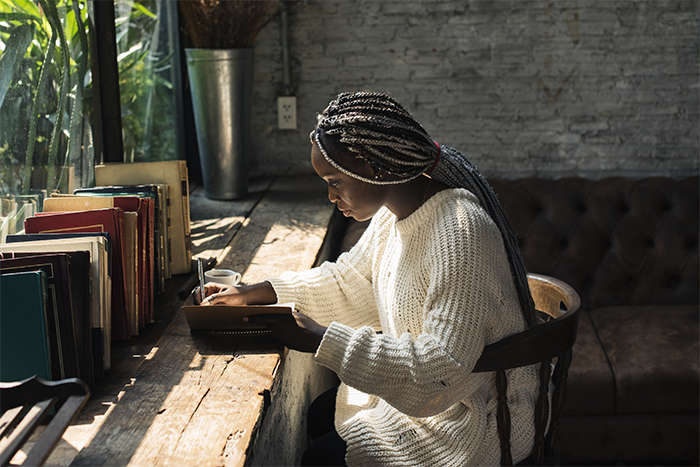 The year is 2005. The iPhone won’t exist for another couple of years. Facebook is in its infancy. The most expensive thing I own is a hand-me-down CD player and the soundtrack to Hannah Montana.

My only real responsibility is to go to school and to make sure that I bring my jacket home. My mom has replaced it twice already, and she says you don’t wanna know what’s gonna happen if you make it a third.

The bell rings, and I’m excited because it’s no ordinary school bell. It’s the bell signaling that school is out for three whole weeks. Christmas is near. I love holiday breaks. Yes, for the obvious reasons—sleeping in late, spending time with family, and the wonderful presents promised on Christmas. But what I love most is the uninterrupted reading time.

I hop in the back of my mom’s Ford Expedition. My sister is right behind me. As I put my seatbelt on I find a Skittle on the seat, which is odd because my mom never buys Skittles. She never buys any of the good stuff. She knocks it out of my hand so I don’t eat it. I beg her to buy us McDonald’s. She gives me the death stare. The look of a thousand black mothers rolled into one. I’ve asked her this question a thousand times before, and it’s always the same answer. Simultaneously we say do you have McDonald’s money?

My mom has to go back to work anyways. My little sister and brother hog the TV. My older brother locks himself in his room. My father is nowhere to be found. I tuck myself into bed and start reading Tuck Everlasting.

It’s the first book to ever make me cry, and I wonder if I would ever turn down a chance at immortality.

It feels like a real privilege to be able to enjoy literature, but I will look back on it years from now and realize holidays with my books were a saving grace. Books will offer me certain justices the world cannot. They will allow me to rewrite myself as the protagonist when the world will not.

It’s 2010. My parents are separated and my family is divided, but it’s the first time since the birth of my sister that I have my own room. It’s an odd consolation prize. I still don’t have an iPhone, but I do have a Facebook and a Twitter and a Tumblr and a Pinterest and an ASKfm and any other account that requires me to prove that I’m not a robot. I almost forget I have a life outside of the internet.

It’s Christmastime again. It doesn’t really feel like it. My days of believing in Santa are far behind me, and putting up the Christmas tree in a small two-bedroom apartment doesn’t lift my spirits. My mom takes me to Borders and buys me the entire Hunger Games trilogy. Hardcover. The good stuff. I read them back to back taking breaks only for food, water, and the bathroom.  It’s the fastest I’ve ever read. I keep them forever.

I wonder what it takes for a girl to get a guy like Peeta Mellark.

2018. I am in my second and final year of graduate school. Thank God. I can’t believe that I paid money to torture myself. I decide that I won’t go home for Christmas. My granny is disappointed, but it’s too expensive and too far, and I’d rather catch up on all the sleep I’ve missed.

I have my own car now, and my own McDonald’s money. I never eat it. One too many documentaries terrified me, but it’s nice to know I have it. I say that I’m going to read something for fun, something I don’t have to annotate or analyze. I don’t.

I wonder when my love of reading will come back.

The year is now. This very moment. I am an unmistakable grown-up with a grown-up job and grown-up responsibilities. I have to change my windshield wipers. No one ever told me, and now they squeak anytime it rains. My holiday plans are undetermined, but these days I can hardly decide what I’ll have for lunch. My partner bought me an Angie Thomas novel for my birthday a couple of months ago. I was saving it for a rainy day. A long rainy day where the streets are so flooded, they’re closed down, and no one expects me to show up anywhere.

Reading it during Christmas sounds far better. I wonder why no one introduced me to Angie Thomas when I needed her most, when I imagined myself as white protagonists.

One thing is for certain: I am going to read this novel like it’s Christmas in 2005.

Chelsea McLin joined AWP as an intern in 2018 and now serves as the Registration and Diversity & Inclusion Coordinator. She holds a BA in English from the University of San Diego, where she minored in creative writing and ethnic studies. She also received her MA in English with a focus in African American literature at the University of Maryland. Chelsea also worked at UMD's Office of Undergraduate Admissions serving primarily underrepresented students. She enjoys literature that celebrates Black women.