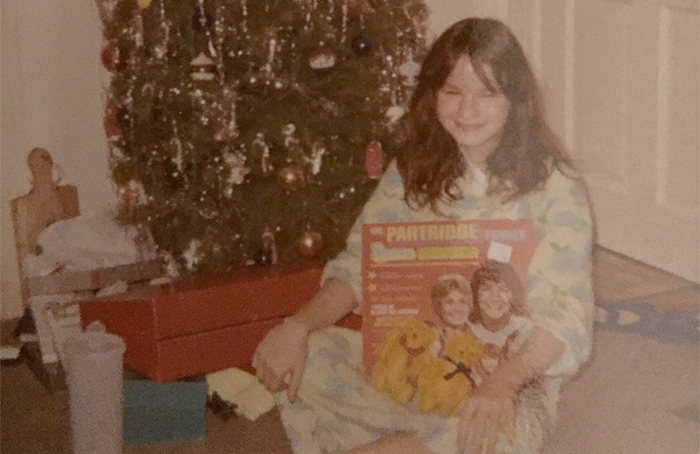 There it was, under the tree, or next to the tree—as big as the tree. It was straight out of the Sears catalog. It might well have been the floor sample. It had a standard seat and handlebars with tassels. It had training wheels. To acknowledge its lack of a basket in which to carry, Toto-like, my cat Cuddles would have been churlish.

I don’t remember why I’d said I wanted a bike. Probably the same reason people want the latest flashy thing their friends have. The Joseys and the O’Boyles and the Porters glided and hurtled up and down Maple Avenue on theirs, so why not me? Or maybe Jan Brady or Danny Partridge had gotten one?

It was jawbreaker red. As a child, I’d been asked my favorite color, and even as I’d stared at my red shoes as I sat in the back seat of Uncle Paul’s Ford, I remembered that Daddy always said we were Irish, so I decided I had to say green. Who does that—changes their favorite color on the basis of inaccurate genealogy and shopworn ethnic clichés? Three-year-old me, that’s who.

That’s it. I bet I decided I wanted a bike because I believed I was supposed to want one.

At eight, I was a tall, large-featured girl—people always thought I was older than I was. I was not athletic; I’d have preferred not to have a body at all, but to exist as a floating sinless brain, hovering over everyone else in a modestly superior way. Who was going to teach this bookish beanpole child to ride? My parents were well into middle age. Fifty was old in those days. Daddy ambled or shambled but never ran. Mom might have wanted to help but was only a hair taller than me; running alongside me as I tried not to break the bike or a bone would have been impossible for her. I had recently been told I was too big to sit on people’s laps. It was a rough year.

Time and regret have hazed over what happened next. I guess the red bike sat in the basement, and eventually it was given away. My guilt at not using it lasted well into adulthood. I still don’t know how to ride, and I’m older now than my parents were when they gave me what they thought I wanted.

Gratitude for a gift doesn’t necessarily mean it’s a beloved gift. You probably have someone in your family who, hypothetically speaking, believed that you were seriously into unicorns and therefore started giving you unicorn paintings and unicorn throws and shiny brass unicorn figurines that you had to dig through the closet and find and place on the mantel whenever your in-laws were coming by. Hypothetically.

But gratitude isn’t enhanced by guilt. My parents probably spent a lot more on that bike than they usually spent on Christmas gifts, but, both long gone now, they’d probably not be grateful to know that I still wear it as a two-wheeled millstone around my metaphorical neck.

It was around this same age that Mom gave me something I still use. On one of our trips to the library, she introduced me to a fat volume whose cover featured girls in long dresses, gathered around a piano, bathed in light antiqued by innumerable borrowers’ hands. “Christmas won’t be Christmas without any presents!” was the opening line, spoken—“grumbled”—by Jo March, Louisa May Alcott’s surrogate in Little Women. The March family were the noble poor—taking their Christmas breakfast to their starving immigrant neighbors, celebrating with songs and plays in lieu of lavish displays of presents, and playing at being holy pilgrims who resolve to abandon their burdens—vanity, envy, anger—by journeying the path to the Celestial City. Even in the heightened moral rectitude of my youth, I found the Pilgrim’s Progress stuff a cloying Christmas pudding to swallow, but I was immediately captivated by the saintly third daughter, Beth, who loved cats and pianos and was shy, just like me. Without spoiling a 150-year-old classic of YA fiction, I’ll note that while Beth ultimately got the perfection she deserved, it was in a more than dismaying fashion.

Over years of re-readings, it sank in that the book was really about its most flawed and eccentric and maddening and enticing character, Jo. Did Mom ever point out to me that Marmee’s confession to her headstrong daughter about the quick temper they shared was mirrored in our own relationship, however much we cared about seeming kind and good at a time when, for women, “kind and good” meant either physically beautiful or virtuously invisible? I’d love to be able to tell her how I now put on my writing hat, as Jo did, and arrange the throw pillows to indicate that “genius burns” and I shouldn’t be disturbed. Sometimes, you don’t discover the real gift until well after the paper and bows are gone.

The travails and blessings of Jo and her family—and Alcott’s apple-tart, generous prose—have brought me joy for decades now. I used to read Little Women annually, and now that yet another film version is nigh, I think I’ll carry that phantom Red Bike of Christmas Present Past, lay it down at the foot of the Celestial City of Bygones, and pick up my favorite book again.

Pamela Murray Winters has a BA in English from the University of Maryland and an MFA in creative writing from Vermont College of Fine Arts. Her first book of poems, The Unbeckonable Bird (FutureCycle Press), was published in 2018. When she’s not copyediting for AWP, revising her next three poetry manuscripts, or going to readings (including the Evil Grin Poetry Series in Annapolis, which she helps organize), her interests include music, road trips, and fantasizing about cats.