Giving Thanks to the Ampersand 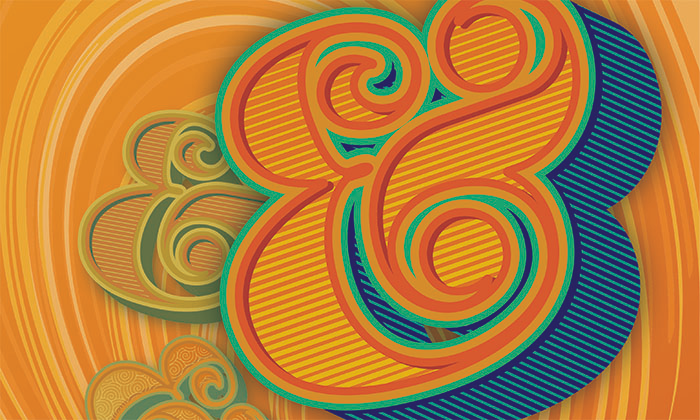 Did you know that September 8 is National Ampersand Day? The ampersand symbol we use today is derived from a ligature combining the letters E and T. There’s evidence of its use as far back as the 1st century A.D. where it appeared in graffiti on a Pompeiian wall. The Latin word et meant “and,” and using a single symbol for that word saved the writer both time and resources such as paper and ink. The modern italic type ampersand dates back to the Renaissance, but the word “ampersand” itself seems to originate only in the late 18th century. The phrase and per se and was used to help people remember the symbol. When the phrase is chanted quickly and repeatedly, it becomes the “ampersand” we all know and love.

AWP especially has embraced the ampersand. When we at the Associated Writing Programs changed our name in 2003 to the Association of Writers & Writing Programs, we made a conscious decision to use the ampersand in our official name instead of the word “and.” The symbol is easy to overlook, but it is right there in the middle of our name, and we are proud to have it. According to AWP’s former director, David Fenza, and AWP’s current Director of Publications, Supriya Bhatnagar, there were a few different reasons for choosing to use the ampersand in 2003. First, our new name was long, and the ampersand made it just a few characters shorter. Second, names, titles, and headers are more quickly read when using an ampersand; many well-known brands use them for that reason. And, third, we liked the look of it stylistically. It brought some personality with it as it closely tied together two of our member constituencies—writers & writing programs.

The ampersand has become a larger part of AWP’s brand. We’ve embraced it for names of projects and services such as the AWP Conference & Bookfair as well as Writers’ Conferences & Centers. We also use it in all our website page headers, such as the Hotel & Travel page or the Community & Calendar section. We use the ampersand for titles in our enewsletters, our conference program, and all other print publications. It’s a part of the PHP language, so it is even in the code we write that creates functionality on our website.

The front cover of our September 2012 issue of The Writer’s Chronicle was covered with artistically rendered ampersands, created by artist Daniel Pelavin, specifically to highlight Patrick Moran’s article “The Ampersand: Casual Vortex or Engraver’s Shortcut.” This piece explores the ampersand not just as a mark of punctuation to show a conjunction but as a complex part of poetry. “From Blake to Graham, there is clearly a literary thread that holds all of these poets together, but perhaps more importantly, there is the visual element that engages the reader in an individualistic and interpretive expression of content and style,” Moran writes.

There are many ways to draw an ampersand, but in AWP’s brand font, its curves and straight lines feel both classic and playful. Each morning when AWP staff arrive at the office, we see the ampersand in our name on our front door and then again on the wall in our reception area. This National Ampersand Day, we pay our respects to this logogram that is literally part of the Association of Writers & Writing Programs.