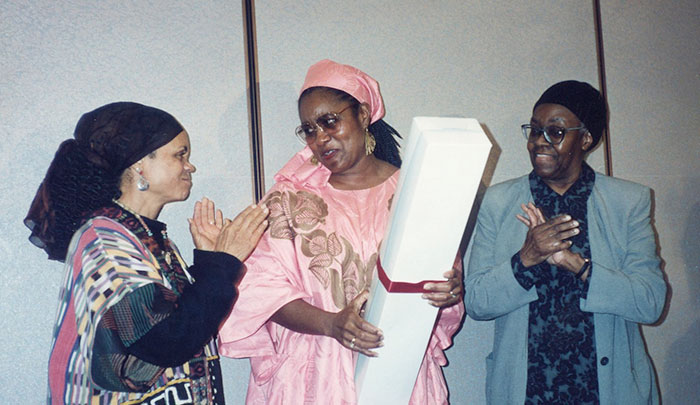 The above photograph is of Sonia Sanchez, Joanne Gabbin, and Gwendolyn Brooks at the Furious Flower Poetry Conference in 1994.

Twenty-five years ago, hundreds of poets, scholars, and poetry enthusiasts gathered at the Furious Flower Poetry Conference at James Madison University for what became the nation’s largest meeting devoted solely to Black poetry. “The coup of the century,” Eleanor Traylor proclaimed. When I conceived of the idea for an event dedicated to Gwendolyn Brooks, the lines from her poem “The Second Sermon on the Warpland” stayed on my mind: “The time / cracks into furious flower. Lifts its face / all unashamed. And sways in wicked grace.” For surely Brooks was the embodiment of the “furious flower” and a powerful voice in the latter half of the 20th century. So, in September 1994 when Gwendolyn Brooks strode across the stage to the roar of the crowd, I realized I was witnessing, as Haki Madhubuti expressed so movingly in his tribute to her, a woman “distinctive and proud at seventy-seven” who “wears her love in her language. If you do not listen, you will miss her secrets. We do not occupy the margins of her heart, we are the blood, soul, Black richness, spirit, and water-source pumping the music she speaks.” For so many of the luminaries that graced the stage before and after her, it was her spirit that catalyzed the entire conference.

Though over the years the contributions of Furious Flower have been many and varied, I see its most significant contribution as providing a physical and digital space where Black poetry is valued, respected, and celebrated without regard to the established literary arbiters who have sometimes ignored its significance. So many poets and scholars flocked to the first conference in 1994 because, I believe, they wanted to be in the midst of those who loved and valued what they did. Granted, the national newspapers like the Washington Post and the New York Times covered the conference; however, the most gratifying gaze was the interior one. Poets such as Rita Dove, Sonia Sanchez, Amiri Baraka, Askia Touré, Elizabeth Alexander, Nikki Giovanni, and Eugene Redmond came to celebrate Gwendolyn Brooks and left seeing how their work had more that united them in purpose than separated them. I am reminded of Michael Harper’s comment two months before the 1994 conference opened, when he told me, “Girl, you have the makings of a powder keg that could blow up in your face.” He was referring to all the poets who were from different generations, political and philosophical ideologies, and personal histories, who might be at each other’s literary throats. Of course, none of that happened.

What did happen was the creation of a living poem: Val Gray Ward’s dramatic roll call of the ancestors, Baraka’s jazz-inspired rendition of “Heathens,” Mari Evans’s awe-inspiring recitation of “I Am a Black Woman,” Sam Allen’s sermonic intonations of history, Toi Derricotte’s playfully titillating love poems, Kalamu ya Salaam’s “Call of the Wild” as he built a collective definition of poetry, Alvin Aubert’s powerful testimony to grief, and so much more.

After the success of the first groundbreaking conference, we went on to host two other decade-defining conferences in 2004 and 2014, established the first academic center solely devoted to Black poetry in 2005, and reached thousands of poets, educators, students, and poetry lovers with our media and anthologies, a national K-12 poetry curriculum, children’s creativity camps, legacy seminars on Lucille Clifton, Sonia Sanchez, Yusef Komunyakaa, and Nikki Giovanni, collegiate summits, and our online literary journal, The Fight & The Fiddle. Also in line with our mission to celebrate the accomplishments of our own, we have collaborated with Nikki Giovanni and the Wintergreen Women Writers’ Collective to produce moving tributes such as 73 Poems for 73 Years, a memorial tribute to Lucille Clifton; Sheer Good Fortune, a tribute to the life and work of Toni Morrison; and Throw Your Head Back and Sing, a memorial tribute to Maya Angelou.

Fast-forward with me to the spring 2019 semester at JMU, when we launched a course called “Innovating the Archives,” in which students from various majors worked with professors from four disciplines to build an online repository for our extensive Furious Flower digital archive, furiousflower.org. As one of the faculty members who took part in the course and because of my perspective as founder, historian, and professor, I had the sometimes dizzying experience of remembering hundreds of images from the past, being wholly present in the moment, and seeing with weird clairvoyance the future, all at the same time.

Early in the class I told the students about the Friday night banquet ceremony during the 1994 conference that honored the elder poets: Gwendolyn Brooks, Margaret Walker Alexander, Sam Allen, Raymond Patterson, Mari Evans, Pinkie Gordon Lane, and Naomi Long Madgett. I got caught up in the memory of my going over to the table where Sonia Sanchez sat and leaning over to ask if she would give a brief impromptu tribute to Gwendolyn Brooks. After she looked at me with this incredulous expression, put down her fork, and pulled a pen out of her bag, she began to write. Less than an hour later, she stood behind the podium and read her freshly minted poem, “For Sister Gwen Brooks.”

Of course, my present-day students were amazed by the speed with which she wrote this poem, and they were equally impressed that Sanchez chose to include that poem in the text that we were using for the class: Furious Flower: African American Poetry from the Black Arts Movement to the Present. As I explored the archive with them, among the most startling finds was heretofore unseen footage of a very young Kwame Alexander, who would 25 years later be the author of 19 books and would be touring the country with his award-winning book, The Undefeated. Imagine my surprise when I saw a clip of Ta-Nehisi Coates reading an original poem called “Last Night” at one of the poetry slams. The 19-year old student at Howard University, now the nationally known author, journalist, and comic book writer, wowed the audience with lines like “silhouette swimmers in an ocean of sheets.” These bits of footage reminded me of the impact that Furious Flower has had on the young Black poets who were present at the first conference and those that simply heard about it. These younger poets generated the kind of energy in impromptu readings around Harrisonburg, in the poetry slams, at the open mics, and in the conference presentation by the Dark Room Collective that symbolized “a revolution in African American poetry,” which was the pervasive theme of the conference. Poets like Natasha Trethewey, Kevin Young, John Keene, Major Jackson, Sharan Strange, Thomas Sayers Ellis, and Carl Phillips were among voices that exploded on the scene. They led a new generation of poets who emerged from writing workshops and centers like Cave Canem, Callaloo’s creative writing workshops, the Center for African American Poetry and Poetics, The Watering Hole, and MFA programs all over the country.

Today, these poets are at the very center of the literary scene in America. For example, Natasha Trethewey and Tracy K. Smith have joined Gwendolyn Brooks and Rita Dove as Poets Laureate of the United States, John Keene won the 2018 MacArthur Foundation Fellowship and the Windham-Campbell Prize, and Kevin Young, author and editor of several books of poetry, is the poetry editor of the New Yorker and the director of New York Public Library’s Schomburg Center for Research in Black Culture. I have witnessed this burgeoning growth, now evidenced in our forthcoming book from Northwestern University Press, Furious Flower: Seeding the Future of African American Poetry, which I am co-editing with Lauren K. Alleyne.

Many of the 120 poets in our table of contents have been the recipients of prestigious prizes, national books awards, foundation fellowships, distinguished professorships and directorships. I am happy to report that three of them, Tiana Clark, Clemonce Heard, and Cynthia Manick, have won a Furious Flower Poetry Prize. The following excerpt from Clark’s poem “How to Find the Center of a Circle,” reflects the genius and innovation that I have come to expect from this present generation of Black poets:

I know the power of poetry to change lives and move people into positive action. The idea to have a conference to honor Gwendolyn Brooks changed my life and led me to help midwife a third renaissance of Black poetry in America. On September 27-28, 2019, we will gather in Washington, DC, at the Grand Hyatt and the Smithsonian’s latest jewel, the National Museum of African America History and Culture, to celebrate Furious Flower’s 25th anniversary. We will celebrate Furious Flower as a national center for the discussion of Black poetry, or as Nikky Finney puts it, “Black poetry planet.” If the stars align nicely, this event will result in the establishment of an endowment to insure the longevity and financial security of the center. Needless to say, I see a bright future for the Furious Flower Poetry Center because every day I see us breaking new ground in this field that we have cultivated and nurtured.

Joanne V. Gabbin is the executive director of the Furious Flower Poetry Center and a professor of English at James Madison University. She is the author of Sterling A. Brown: Building the Black Aesthetic Tradition and a children’s book, I Bet She Called Me Sugar Plum. She is also the editor of The Furious Flowering of African American Poetry, Furious Flower: African American Poetry from the Black Arts Movement to the Present, Mourning Katrina: A Poetic Response to Tragedy, and Shaping Memories: Reflections of African American Women Writers. A dedicated teacher and scholar, she has received numerous awards for excellence in teaching, scholarship, and leadership. Among them are the College Language Association Creative Scholarship Award for her book Sterling A. Brown; the Outstanding Faculty Award, awarded by the Virginia State Council of Higher Education; the Provost Award for Excellence; the JMU Distinguished Faculty Award; induction into the International Literary Hall of Fame; and the first named professorship in the JMU Honors College.

“For Sister Gwen Brooks” by Sonia Sanchez is included in the anthology Furious Flower: African American Poetry from the Black Arts Movement to the Present, University of Virginia Press, 2004, pp. 65-66. It appears here with permission from the editor.