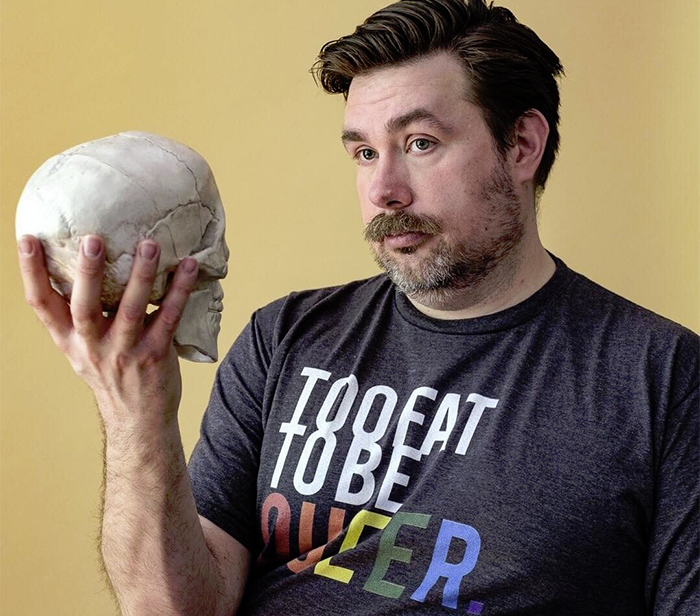 The Stonewall Riots, also known as the Stonewall Uprising, happened in New York City fifty years ago this year, June 28. 1969. For years, the police had raided the Stonewall Inn, arresting gay and trans people for, as discussed in a History Channel video on the riots, “solicitation of homosexual relations and...wearing gender-nonconforming clothing.” On that night, June 28, police officers raided Stonewall. The patrons—the homosexuals, the trans, the gender nonconforming, the queer—had had enough. They fought back. They took to the streets. The fight for queer rights had officially and publicly begun. A year later, on June 28, 1970, the first Pride parade happened in New York City. Pride parades moved across the country.

As with most things, especially queer things, Pride and the parades happen in bigger cities. They don’t happen everywhere. Smaller towns don’t necessarily have a Pride. For my MFA in creative writing, I attended the University of Illinois at Urbana-Champaign. The town is surrounded by cornfields and lives beyond them only because of the University. Urbana-Champaign had its first Pride parade on September 6, 2014. I know because I marched in it, representing my employer’s Pride group. Walking the parade route, essentially a walk around the few blocks of downtown Champaign, felt in some way like a little kid playing dress-up. In other ways, it felt triumphant. Parade watchers ringed around the entire route as if they were protecting us as they celebrated us. Surrounded by all that support made me feel invincible, even if that feeling would only last for thirty minutes.

This happened only five years ago. It happened in September because the students are not around in June. The accompanying Pride Fest happened, at least when I was there, in a nearly abandoned mall in Urbana. There are no windows in the mall. No way to see in. No way to see out.

Writing prompt: write about a time you felt pride and shame simultaneously.

Pansy. It’s a flower. One definition: “a popular cultivated viola with flowers in rich colors, with both summer and winter flowering varieties.” Purple is a popular pansy color, but they come in so many colors and are often more than one color or more than one shade at a time. The shape of the petal and the shading of it make it look like the floral version of a butterfly. Pansies, it seems, want to be seen and they want you to know that they will be what they want to be. Pansies are pretty.

Pansy. It’s a person. A second, “informal/offensive” definition is “effeminate or homosexual man.” Effeminate means for a man to have “feminine qualities.” Unmanly. These concerns are applied to male children at an early age.

I don’t remember being called a pansy or effeminate directly as a kid. Instead I was often called sensitive, which had the same meaning as those other words in that context. Boys at school often called me a faggot. My aunt once called me “that” as I stood in her kitchen wearing my Madonna Girlie Show Tour T-shirt, all my weight on my left leg, my left hip jutted out, my hand on that hip. I’d been listening to my aunt and Diana argue, and I suddenly became the subject of that argument. Diana lunged at her sister, my aunt, after she called me “that.” They slapped each other, pulled at each other’s hair. I intervened. My aunt’s nails cut my lip and tore the collar of my Madonna shirt.

There’s a picture of me and my sister outside the front door of my grandparents’ house. I’m in my green soccer jersey, and I’m holding a stuffed Smurfette close to my chest. I’m maybe seven in the picture.

I’ll never be interested in sports. As I grew up, I developed the build of a football player. My grandfather would grab my shoulders and say, “these are football shoulders.” I didn’t want to play football. I wanted to dance. I learned all the steps to Janet Jackson’s “Miss You Much” and learned how to vogue. As a queer boy in the Midwest I knew nothing of ballroom culture and the origins of vogueing. Yet, I’d be in my living room, watching a major pop star, a woman, vogue and I’d copy her moves. I’d want to be as strong and elegant as a woman.

When I was married, friends often said that she seemed like the husband and I seemed like the wife. We didn’t dispute those claims. Perhaps I didn’t hide my queerness as well as I thought. Perhaps that’s why when I finally came out to my now ex-wife, she responded, “that doesn’t surprise me.”

Writing prompt: Diana is the woman who birthed and raised me. Diana is not her real name. For forty-two years, I called her mother. By removing the label of mother, I can talk about Diana as a person, not just as my mother. What are some common labels you’d like to remove? Write about which ones and why.

Queer. A word once only considered a slur. My grandfather would sometimes shout, “those damn queers” while watching TV or sitting next to the swimming pool when we would go on family vacations.

Reclaim. Queer encompasses not just who I sleep with, but who I am. It’s how I interact with the world and, for better or worse, how the world interacts with me. I reclaim pansy. Pansies are pretty. They are diverse. I’ve recently reclaimed “fat” for myself. I had a T-shirt made that says “Fat & Queer” on it. I am: a fat, queer, proud pansy.

Writing prompt: Which word(s) would you like to reclaim? Reclaim them.

Bruce Owens Grimm is the president of the LGBTQ Caucus. An essayist and memoirist, his work has appeared in The Rumpus, the Kenyon Review Online, Ninth Letter, the Poetry Foundation’s Harriet blog, Older Queer Voices, and elsewhere. He currently writes Cultland, a monthly essay series for Iron Horse Literary Review. He is co-editing Fat & Queer, an anthology inspired by his Fat and Queer series for Queen Mob’s Tea House. More can be found at bruceowensgrimm.com.