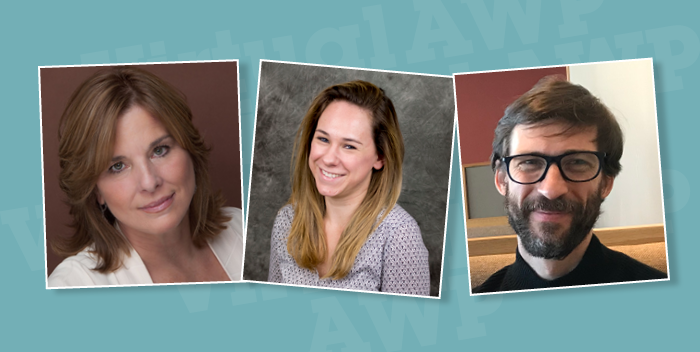 Just in time for Disability Pride Month, AWP is excited to announce our latest installment of Virtual AWP: Writer to Writer Conversations & Readings, featuring W2W mentor and disability activist Eileen Cronin in conversation with her two mentees. Our Virtual AWP Writer to Writer events showcase discussions with former mentors and mentees of the Writer to Writer Mentorship Program. Currently in Season 16, the program matches writers from all backgrounds with published authors for a three-month series of modules focused on craft, the writing process, publishing, and more.

These events examine the practice and process of mentorship, give thanks to the mentors who have graciously volunteered their time, and allow members to gain first-hand insight into the program. In this conversation, mentor Eileen Cronin reunites with Rachael Souza and T.K. Dalton to discuss disability and its impact on both their personal and professional lives in the writing world. This event premiers Thursday, July 14, 2022  at 6:00 p.m. EDT and includes a live Q&A on YouTube.

To receive a reminder and a direct link to this free event, as well as updates on future events, register online.

Registration is free, and you do not have to be a member of AWP to do so. However, to participate in the live Q&A, you will need to sign in to YouTube.

Eileen Cronin's Mermaid: A Memoir of Resilience, translated into three foreign languages, was one of O Magazine’s Best Memoirs of the Year in 2014. She has published in The Writer’s Chronicle, The Washington Post, The Daily Beast. She’s had multiple publications in literary reviews, Pushcart nominations, and a notable essay in Best Essays. She won the Washington Writers’ Award in short fiction and was a finalist in the Pirate’s Alley Faulkner Competitions for novel and novella. A writing instructor at UCLA Extension, Eileen has also appeared as a featured panelist at the Association of Writers and Writing Programs, performed with the Moth, and has been a guest lecturer at the University of Southern California. She is a clinical psychologist in family medicine at UCLA.

Rachael Souza is currently a content strategist with an academic publisher and a freelance contributor to The Everygirl and Reviewed's Accessibility section. She recently received her MFA from Salve Regina University in Newport, RI and is working on completing her memoir, Ciao Bella. Her memoir is about growing up with a physical disability and centers on a trip she took to Italy at 18. When not working or writing, Rachael can be found by the ocean, traveling, or with her dog, Scout.

T. K. Dalton's creative nonfiction has been cited as “Notable” in Best American Essays and has been nominated for the Pushcart Prize and nominated for inclusion in Best of the Net. Pieces of his memoir-in-essays, The Intimate Register, appear in Apogee, The Millions, and elsewhere. A founding editor of The Deaf Poets Society, he presents regularly on writing and disability, most recently on a featured panel at AWP 2021. Tim is currently completing a PhD in English at the City University of New York, where he has taught writing since 2008.