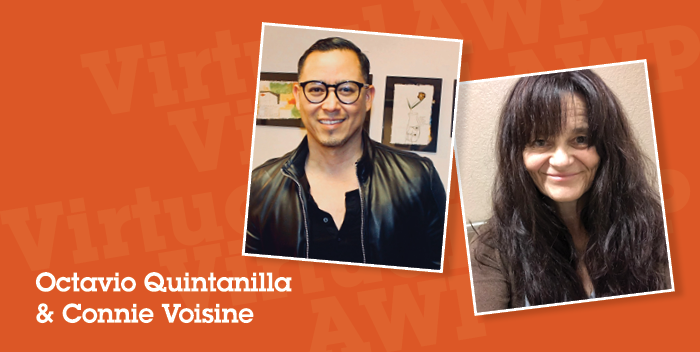 We are welcoming Octavio Quintanilla and Connie Voisine to our summer Virtual AWP: Conversations with Writers schedule. Poets Octavio Quintanilla and Connie Voisine discuss their latest projects with an eye toward looking at individual process and how the poet adapts their process to tackle issues of social and historical urgency—from border and sectarian conflict to defining what art means to us in these pandemic times.

Join us on YouTube for this Virtual AWP event, on Friday, June 12, at 7:00 p.m. ET. Register to let us know you plan to be part of the conversation, and we will make sure to send an update when the event goes live. To be part of the conversation on YouTube, remember to log in or create an account with YouTube. Octavio and Connie will be available during this premiere watch party event.

Octavio Quintanilla’s Frontexto project (the term frontexto is a blend of frontera and texto, border/text) began New Year’s Day 2018, when he challenged himself to carve some time out of each day to write. His goal was to write a poem each day in Spanish and post it on social media. Quintanilla’s daily practice quickly incorporated drawing and became an exploration into the relationships of text and image. Quintanilla says of the Frontexto project: “Lyricism and brevity are at the core of these poems. Almost always the text and image correspond in some way. I have started using color/mixed media, which opens more possibilities. I write them in Spanish because why not. I grew up speaking it. Then I was forced to suppress it when I crossed the border. It’s staying.”

Connie Voisine is the author of four poetry collections, including Rare High Meadow of Which I Might Dream, a finalist for the LA Times Book Award. Her latest collection, a book-length poem entitled The Bower, asks how a person can come to understand wars and hatreds well enough to explain them truthfully to a child. Voisine says, “Right now, I live 24 miles from a border crossing into Chihuahua, Mexico, and, considering I was born and raised on the US/Canada border, I can’t seem to get away from the conversation about borders. Nor do I want to. Thus, on a Fulbright, I traveled to Belfast, Northern Ireland, a city that has nearly one hundred walls separating one neighborhood from another. That city sharpened my questions of how sectarianism develops and how.”

Octavio Quintanilla is the author of the poetry collection If I Go Missing (Slough Press, 2014) and served as the 2018-2020 Poet Laureate of San Antonio, Texas. His poetry, fiction, translations, and photography have appeared, or are forthcoming, in journals such as Poetry Northwest, Salamander, Texas Highways, RHINO, The Rumpus, Alaska Quarterly Review, Pilgrimage, Green Mountains Review, Southwestern American Literature, The Texas Observer, Existere: A Journal of Art & Literature, and elsewhere. Visual poems have been exhibited in several galleries, including Presa House Gallery, Equinox Gallery, and at the Southwest School of Art in San Antonio, Texas. He holds a PhD from the University of North Texas and is the regional editor for Texas Books in Review and poetry editor for The Journal of Latina Critical Feminism and for Voices de la Luna: A Quarterly Literature & Arts Magazine. Octavio teaches literature and creative writing in the MA/MFA program at Our Lady of the Lake University in San Antonio, Texas.
Connect on Instagram: @ writeroctavioquintanilla
Website: octavioquintanilla.com

Connie Voisine’s previous books include Calle Florista and Rare High Meadow of Which I Might Dream, both published by University of Chicago Press. Rare High Meadow was a finalist for the Los Angeles Times Book Award. Her first book, Cathedral of the North, won the AWP Award in Poetry. Poems have appeared in the New Yorker, Poetry magazine, and elsewhere.