Both Sherman and Zinna, long-time employees of AWP, have served in senior staff positions prior to their promotions, and both have been serving as Interim Co-Managers at AWP since November 2019.

AWP Board Chair Kathleen Driskell says “After studying similar nonprofit organizations with this innovative shared leadership model, the board feels this is a great organizational structure for AWP. It allows for our staff to communicate more effectively and work collaboratively and creatively. Together, Diane and Cynthia are perfectly suited to lead AWP into a successful and exciting future.”

In addition to serving as Executive Co-Director, Sherman continues as Director of Conferences. Sherman joined AWP in 2012 as the Associate Director of Conferences & Bookfair Manager. She has over twenty-five years of experience in meetings and exhibits management and was awarded the Certified Meeting Professional designation from the Events Industry Council, which recognizes expertise in the meetings industry. In 2019, Sherman presided over the Portland AWP Conference, the most successful conference in the organization’s history.  Sherman will continue to bring her ability to listen, analyze, and lead—thoughtfully and enthusiastically—to her leadership of the organization and the conference. She looks forward to building a more welcoming and inclusive community, and she is committed to collaborating with the AWP caucus leadership to formally acknowledge, honor, and respect the original peoples and land in each city in which AWP holds the conference. 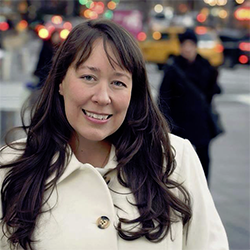 Zinna previously served as AWP’s Deputy Executive Director. In addition to now serving as Executive Co-Director, Zinna continues as Director of Membership Services, a position she has held since coming to AWP in 2012. Zinna is a very familiar presence to all of the more than 600 writers who have taken part in AWP’s Writer to Writer Mentorship Program, a program she created in 2014. She is also now developing #WritersServe, which spotlights writing workshops happening in community settings such as hospitals and prisons. Since 2017, Zinna has organized a large community service project at the AWP conference each year; this year’s service project in San Antonio will benefit Fiesta Youth, an organization that works on behalf of LGTBQ youth and their families in San Antonio. Zinna received her MFA from the University of Florida in 1998, and she taught creative writing for ten years at colleges in the Washington, DC area. Prior to AWP, she worked for several nonprofits, including twelve years at the national headquarters of the American Red Cross. She has attended the Sewanee, Tin House, and Bread Loaf Writers’ Conferences, and her debut novel, The All-Night Sun, is forthcoming from Random House in August 2020.

You can view the full press release in our press room.