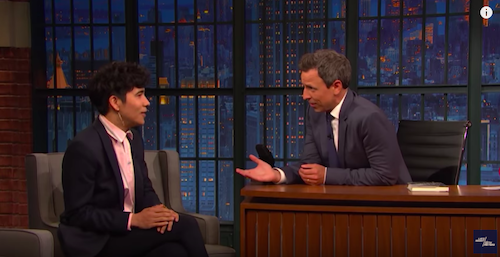 When asked by Meyers if the similarities between the novel’s main character, Little Dog, and Vuong himself were a deliberate choice, Vuong said, “That was a purposeful choice. I wanted to start with truth and end with art. That was always my goal. I could have put these folks in Mars, and turn it into sci-fi, I could have put them in ancient Vietnam or Medieval Europe, but I wanted to situate them in Hartford, Connecticut, as Asian American characters, as a way of saying ‘These bodies are inspiring to me. They’re worthy of literature with a capital L’—something that these bodies rarely get a chance to be.”

Vuong also spoke to the Vietnamese traditions that led to the character’s name, the peculiar choices his own mother resisted before giving him his name, and the strange housing circumstances within which he wrote the novel.

“I had noisy roommates...they were kind folks but they were so noisy. I’d looked at the corner of my room [and thought] where is the furthest I can go from these folks? And it was the closet...and for a gay writer the irony is not lost on me. I thought ‘I’m going to go in there and I’m going to reclaim that place.’ And it was beautiful. What was once a prison for me, I turned into a portal to write this book.”

On Earth We’re Briefly Gorgeous has been featured in The New Yorker, Oprah, USA Today, and is currently listed in the Top Ten Bestsellers List for The New York Times.