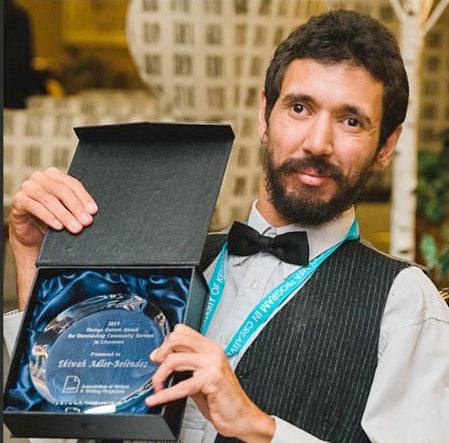 Among the wonderful surprises in store for those who attended AWP’s fundraising gala on Wednesday night, March 27, in Portland was the presentation of the George Garrett Award. This prize is named after the late George Garrett, a former poet laureate of Virginia, and one of AWP’s founding board members. Along with his profoundly rich body of work as a novelist and poet, George Garrett is remembered for his generous treatment of other writers. Dozens of younger writers, both students of his and others with whom he came in contact, were helped at crucial points in their careers by George Garrett.

Each year, AWP therefore honors the memory of George Garrett by recognizing someone who has also been an exemplar for our community in terms of teaching and mentoring, helping to edit and publish the creative writing of emerging or neglected talents, and both building and managing new resources to support writers. The award winner receives a $2,000 honorarium from AWP, together with our heartfelt admiration for the inspiration they offer in service to our community.

This year’s awardee is Ekiwah Adler-Beléndez. His story is one of remarkable perseverance and generosity. After traveling far from his remote mountain village home in Mexico to receive lifesaving spinal surgery, he returned to Mexico, where he established writing workshops for students who had rarely if ever encountered poetry in their lives. He formed student poetry groups, including a group for students in their twenties who were dealing with movement disabilities and varying degrees of cerebral palsy, helping these young people to transcend their physical challenges to harness their dreams, thoughts, feelings, and desires—to tell their stories in their own words. Ekiwah has hosted other poetry groups for much younger Mexican children, helping them to expand their horizons. Ekiwah also remains very active as a writer and as a widely traveled diplomat for poetry.