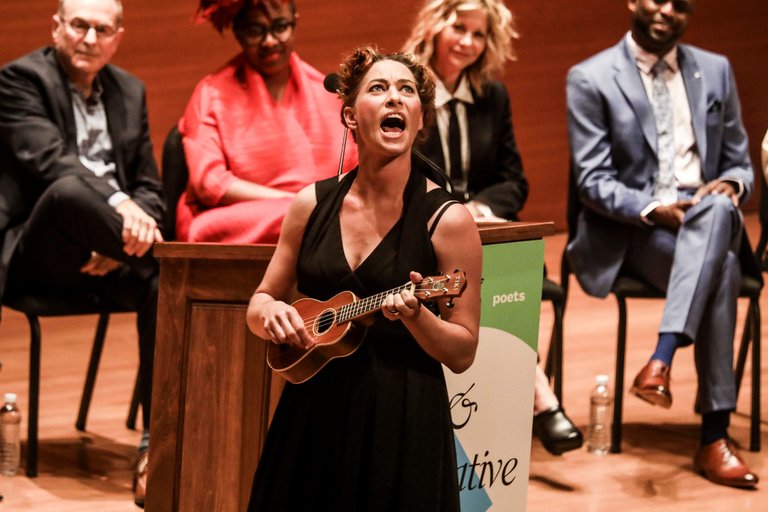 Since the new administration took office in January, poets and writers have become increasingly visible members of the so-called “resistance” against policies proposed by the administration.

Poet Jane Hirshfield is one such writer. As AWP reported in a news item last week, she emailed the organizers of the March for Science on Washington (which took place this past Saturday) a couple months ago to urge them to integrate poetry into the protest, which they did. They even asked Hirshfield to read her poem “On the Fifth Day” during the rally.

“I’ve never done anything like that before,” Hirshfield, a self-described introvert, told The New York Times. “I don’t even give dinner parties.”

Hirshfield added, “Poems are visible right now, which is terribly ironic, because you rather wish it weren’t so necessary. When poetry is a backwater it means times are O.K. When times are dire, that’s exactly when poetry is needed.”

The Times has also shared a “primer” on “poems of the resistance,” which includes “On the Fifth Day,” as well as four other poems by Fatimah Asghar, Alex Dimitrov, Maggie Smith*, and Javier Zamora.

Dystopian novels and historical fiction have also seen resurgences in American culture. Rebecca Mead profiled sci-fi/dystopian author Margaret Atwood in a New Yorker piece released a week ago, and Crystal King, writing for Literary Hub, hears from fellow historical novelists on why historical fiction is “more crucial now than ever before.”

During the 2017 Los Angeles Times Book Prizes, editor-in-chief Davan Maharaj gave a speech in which he highlighted the challenge of “the current political, social, and cultural environment,” and the importance of the written word.

“For today,” Maharaj said, “we find that the written word—the cornerstone of our ambitions, our hopes and dreams—is under siege.

“It’s up to us to tell the stories of those who might otherwise become background characters on the world stage: people who are hated and ignored simply because no one has heard what they have to say, or what their everyday experiences are like.”

Read the full transcript of Maharaj’s speech, or review The Huffington Post’s “spine-tingling,” new dystopian books to add to your to-read list.

*For Maggie Smith, increased visibility is a bit of an understatement recently. Her poem “Good Bones,” which went viral last summer in the wake of the mass shooting at the Pulse Nightclub in Orlando, was featured one of television’s more popular shows, CBS’s Madam Secretary.

“The writer, Joy Gregory, reached out months earlier to ask my permission to use the poem on the show,” Maggie Smith told AWP. “I didn’t know until a few weeks out that the episode would be named ‘Good Bones.’ I didn’t know until watching it live with everyone else which character would read the poem. I was floored when [the character Jay Whitman] took his wallet from his pocket and removed a small piece of paper, and realized it was my poem. I covered my face and cried, and then had to rewind to watch it.”

Following the poem’s appearance on TV, actress Meryl Streep read it at Lincoln Center for the Academy of American Poets Gala.

“That was a complete surprise. I came home that night from running an errand, checked my phone, and saw a tweet—something to the effect of, ‘Meryl Streep just read Maggie Smith’s “Good Bones.”’ At first I thought, What? Where? Why? And then, when I gathered the details, I jumped up and down and squealed like a teenager.”

AWP asked her what Streep’s live reading of her poem meant to her and to poetry more generally.

“I’m not sure I can articulate yet what this means to me. It just happened. But I will say that if someone had told me, when I wrote “Good Bones” on a legal pad in a Starbucks, just some weeknight I’d managed to get out of the house after the kids went to bed, that Meryl Streep would be reading it someday to a large audience, I wouldn’t have believed it. Who would have believed that? I’m grateful to her, and to all public figures who have a platform and use that platform to signal boost for the arts, for human rights, for the environment. We can do better and be better. The arts are a huge part of that for me. I’ve said before that poems are empathy machines. We need them more than ever.”