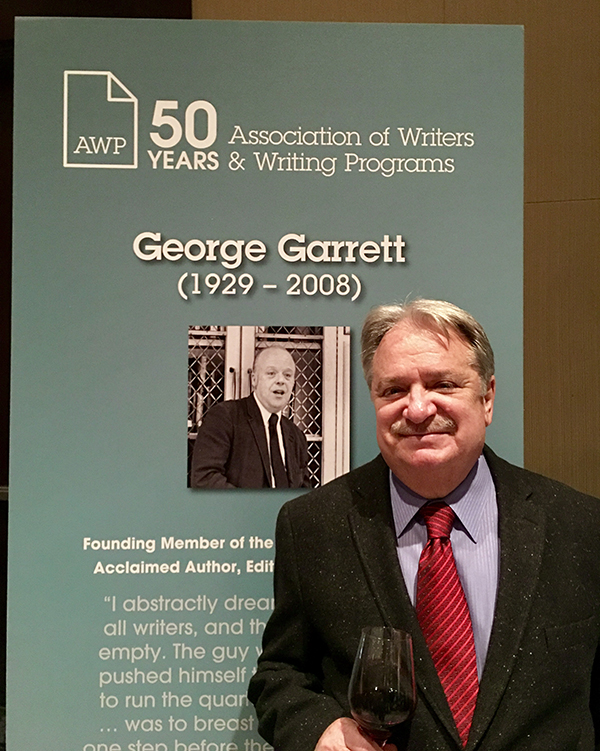 The award is given to recognize those individuals who have made notable donations of care, time, labor, and money to support writers and their literary accomplishments, and is named for George Garrett (1929–2008), who made exceptional contributions to his fellow writers as a teacher, mentor, editor, friend, board member, and good spirit.

The award includes a $2,000 honorarium, in addition to travel, accommodations, and registration to attend AWP’s annual conference, where the award is publicly announced and conferred.

Speaking at the Gala, David Haynes thanked this year’s judges, E. Ethelbert Miller, Cathy Day, and Denise Low, who read “hundreds of letters in support of 55 nominations for the award.” He continued, “Reading these letters is tonic for the soul. They are lovely testimonies about those individuals who build literary communities, who teach the art of writing, who support literary careers, who facilitate cultural exchanges, and who usher new voices into publication.

“This year’s Garrett Award recipient has done all those things, and much more. He has helped to rescue injured children from Vietnam. He supported and encouraged a student through her travails with breast and kidney cancer. He helped another student leave communist Romania. He helped countless students find jobs and build careers. His letters of nomination for this award are seasoned with place names of four or five continents, because that’s how big his horizons are, and it’s those global horizons to which he introduced his students. He is loved and admired by his students for his deep knowledge of literature and for his great knowledge of the world and its peoples.”

John Balaban, after receiving the award, spoke to the attendees. He thanked his former students and his former teachers, one of whom was John Barth, who wrote on Balaban’s behalf to the Penn State Director of Student Aid when he learned Balaban was going to drop out for lack of funding. “Still another letter of his to the University’s president kept me in school, which opened a career for me as a poet, translator, novelist, memoirist, MFA director, and creator of a foundation that preserves ancient texts and libraries in Vietnam.”

Balaban continued: “I note that something like 12,000 of us literary types are gathered here in Washington, a 20-minute walk from the White House, now the Place of Alternative Facts and the Palace of Tweets. So I want to close by sharing with you poets, playwrights, fiction, and nonfiction writers a tweet about literature and those who create it, composed by a Vietnamese emperor long ago for the graduating class of the Temple of Literature of 1442. His tweet of only 56 characters is chiseled in stone: Virtuous and talented men are state sustaining elements: the strength and prosperity of a state depend on its stable vitality and it becomes weaker as such vitality fails. That is why all the saint emperors and clear-sighted kings did not fail in seeing to the formation of people of talent and the employment of literati to develop this vitality. —Trích V?n b?a Ti?n s? khoa Nhâm Tu?t niên hi?u ??i B?o 3 (1442)

“It was just such literati, schooled in poetry and history, who became the civil service of Vietnam, speaking truth to power through their literary learning and writing.”