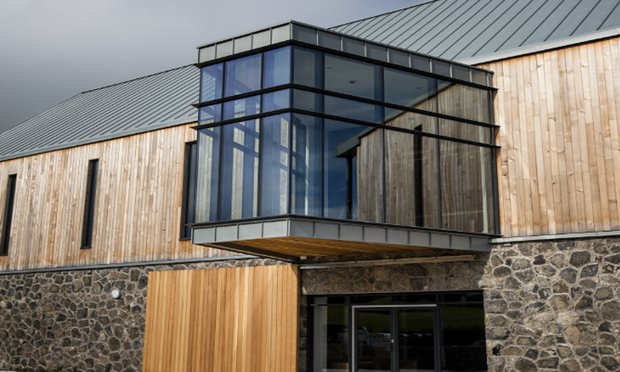 A police station in the late Seamus Heaney’s hometown of Bellaghy Village in Ireland will soon become Seamus Heaney HomePlace, a 21,527 square foot art center dedicated to the poet’s life and work. It will open during the weekend of September 30.

Bellaghy Station itself had long been a symbol of division during Northern Ireland’s Troubles, and its conversion into a symbol of unity is important, said Heaney’s son Michael to the Guardian.

“I think there is something in that,” he said. “I hope there is anyway.... I think dad would be happy.”

Anne-Marie Campbell, who is Mid-Ulster Council’s director of art and culture, added that “it is one of our key projects,” and “we feel incredibly privileged but we feel a great responsibility as well. We’ve worked closely with the family and we see it as an important driver of culture and arts in the area.”

The center will include a permanent exhibition documenting Heaney’s life and poems, and it will also include his personal artifacts, such as his books, his duffel coat, and family photographs. In addition to the exhibition, the center will have a 189-seat performing arts space, a library (which will feature the desk Heaney used in his attic), learning spaces, a café, and an annex.

Seán Doran and Liam Browne, who formerly directed the English National Opera and the Dublin Writers Festival, respectively, have developed the Center’s first cultural program, which will be based on Heaney’s twelve books. The program is titled “12 Months, 12 Books”; it will open with Death of a Naturalist in October and close with Human Chain in September 2017.

The renovation will cost £4.25 million. Heaney’s resting place is close to the center, in a nearby church graveyard.

Heaney was a keynote speaker at AWP’s 2013 Conference in Boston. His conversation with Derek Walcott and Rosanna Warren can be heard in AWP’s podcast series.

Related reading: Langston Hughes’s home in Harlem may also became an arts center, if a neighborhood nonprofit founded by Renne Watson, the I, Too, Arts Collective, is successful with its fundraising project. “I see a need for young people to know about and understand the legacy they are part of; the artists and activists who paved the way for them,” wrote Watson on the nonprofit’s fundraising page at Generosity.