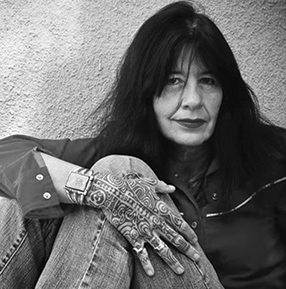 The Academy of American Poets this year has awarded its highest honor, the Wallace Stevens Award, to Joy Harjo. The award is given “for proven mastery in the art of poetry.”

Academy of American Poets Chancellor Alicia Ostriker said: “Throughout her extraordinary career as poet, storyteller, musician, memoirist, playwright and activist, Joy Harjo has worked to expand our American language, culture, and soul. A Creek Indian and student of First Nation history, Harjo is rooted simultaneously in the natural world, in earth—especially the landscape of the American southwest—and in the spirit world. Aided by these redemptive forces of nature and spirit, incorporating native traditions of prayer and myth into a powerfully contemporary idiom, her visionary justice-seeking art transforms personal and collective bitterness to beauty, fragmentation to wholeness, and trauma to healing.”

Harjo is the author of seven books of poetry, including How We Became Human: New and Selected Poems and A Map to the Next World, as well as a memoir, Crazy Brave. Her memoir was honored with the 2013 PEN Center USA literary prize for creative nonfiction. In addition, she has received the PEN Open Book Award, the American Indian Distinguished Achievement in the Arts Award, the William Carlos Williams Award from the Poetry Society of America, and fellowships from the National Endowment for the Arts, the Arizona Commission on the Arts, and the Witter Bynner Foundation.

Harjo, in an interview after hearing she’d won, said, “I am deeply, deeply moved … and honored. I feel like it’s a doorway for Native writers, poets and women. Not many women have won this award and no Natives. I am stunned.”

Her new book, Conflict Resolution for Holy Beings, comes out this month from W.W. Norton.

In addition to the news of the Wallace Stevens Award, the academy announced that Kevin Young’s Book of Hours won the $25,000 Lenore Marshall poetry prize for the year’s best collection, and Marie Howe was given a $25,000 academy fellowship.