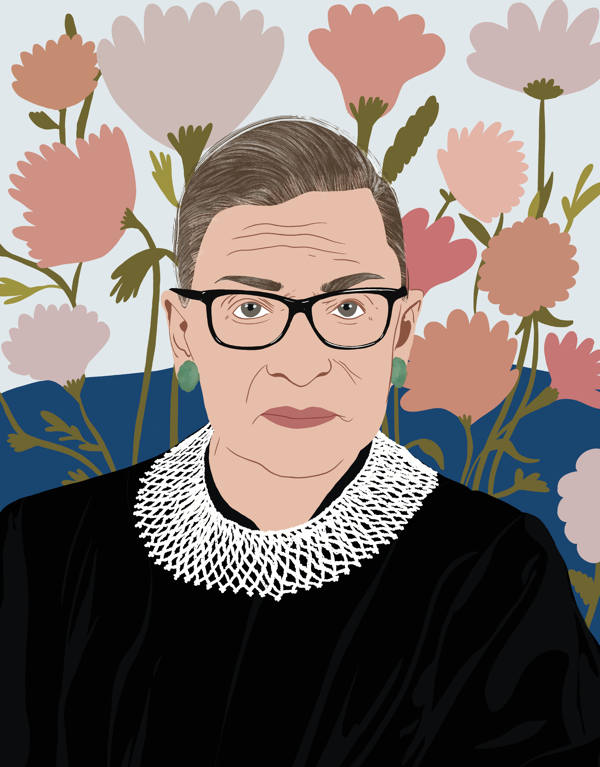 No one lives forever. Yet, we couldn’t help but think that Supreme Court Justice Ruth Bader Ginsburg, the second woman to serve on the high court and a legal pioneer for gender equality, would prove the exception to the rule. What chance would the Grim Reaper have against the Notorious RBG?

Ginsburg spent her life making the world more just for women (and men). She battled sexism as a law school student and faculty member. Even before becoming a Supreme Court Justice, Ginsburg, as a professor at Rutgers and codirector of the ACLU Women’s Rights Project, was a hero for the Women’s movement and its allies.

Being a role model doesn’t begin to convey what Ginsburg has meant to us! During the Trump era, she’s inspired us to not give up—to keep fighting, in any way we can, for justice.

How can we say how sucker-punched we felt when Ginsburg died on September 18 at age eighty-seven? Words fail.

Yet,I bet, Ginsburg, if she were here, would find exactly the right words to describe our grief. Words mattered to her. Writing precise, clear, evocative—persuasive words—was a vital throughline in her work. Being a writer went hand in hand with her work for justice.

Few of us—poets, novelists, essayists—will ever be judges, let alone Supreme Court justices. Most writers aren’t lawyers. You wouldn’t want me to be your attorney if you ended up in court or needed advice on your taxes. Yet, Ginsburg, as a writer, has left a legacy for us.

From the get-go, Ginsburg loved to immerse herself in words. Her mother, she recalled in her book My Own Words, “made reading a delight” for her.

“A writer should have the precision of a poet and the imagination of a scientist,” Vladimir Nabokov said.

Nabokov was one of Ginsburg’s professors when she was an undergraduate at Cornell University. From him, she discovered the possibilities and power of words. “Words could paint pictures, I learned from him,” Ginsburg wrote, “Choosing the right word, and the right word order, he illustrated, could make an enormous difference in conveying an image or idea.”

Ginsburg was brought up to be “a lady.” “She taught me that the way to win an argument is not to yell,” Clara Spera, Ginsburg’s granddaughter, says in the documentary “RBG,” “because often that will turn people away more so than bringing them to your table.”

Throughout her career, from her days as a law school professor to when she worked with the ACLU to her time as a Supreme Court justice, Ginsburg had to persuade and educate (mostly) white men about what life is like for women and men who encounter injustice daily. No matter how renowned they are for their jurisprudence, they were clueless about being paid less because of your gender or being unable to vote because you’re Black.

Ginsburg often used unforgettable imagery to bring home her point in her dissents. In her last decade in the court, she became famous for dissenting often and eloquently. She wrote dissents, she said, to appeal “to the intelligence of a future day.”

From 2006, when Sandra Day O’Connor retired, until 2009, when Sonia Sotomayor was appointed, Ginsburg was the only woman on the Supreme Court.

Engaging in legalese—using only legal language—wouldn’t have enabled Ginsburg to argue persuasively. She took her cues from Nabokov. Like any good storyteller, whether a Talmudic commentator or Shakespeare, she used striking images to help her audience feel the indignities of injustice and imagine the world of people different from themselves.

Ginsburg often used unforgettable imagery to bring home her point in her dissents. In her last decade in the court, she became famous for dissenting often and eloquently. She wrote dissents, she said, to appeal “to the intelligence of a future day.”

I’d bet that even the most gifted poet would be hard pressed to come up with as piercing, indelible image.

Ginsburg would have given style mavens a run for their money. As a writer, she disdained using excess words, pomposity, and inscrutability. Her mantra was “Get it right and keep it tight,” say writers Irin Carmon and Shana Knizhnik in Notorious RBG: The Life and Times of Ruth Bader Ginsburg.

Your words inspire us to get it right, keep it tight, and keep up the fight for justice.

Kathi Wolfe's most recent poetry collection is Love and Kumquats: New and Selected Poems. She is a contributor with the Washington Blade, the LGBTQ paper.